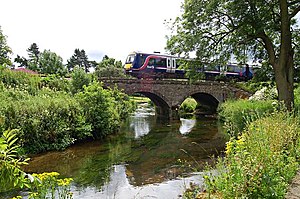 The Eden at Cupar

The River Eden is a river in Fife, and is one of Fife's two principal rivers, along with the Leven. It is nearly 30 miles long and has a fall of around 300 feet. It flows from Burnside, near the northern border of the county, then slowly across the Howe of Fife and through the market town of Cupar to Guardbridge, where it enters the North Sea.

The Howe of Fife is now w low-lying fertile area, but until it was drained in the 18th and 19th centuries the Howe was a waterlogged basin.

The Eden Estuary', an important conservation area for wading birds and a nature reserve. The river holds a good stock of wild brown trout and hosts a fair run of sea trout and salmon.

In previous centuries, its water was used to power mills on its banks, and there was a paper mill at Guardbridge until July 2008.

The Eden Estuary is a Local Nature Reserve and, along with the Firth of Tay was designated a Ramsar site in 2000.

Both estuaries play host to a variety of recreational activities. The Eden estuary, being significantly smaller than the Tay, has few boating opportunities but is an important recreation site for birdwatchers and naturalists, foreshore shellfish collectors, fishing enthusiasts and wildfowlers.