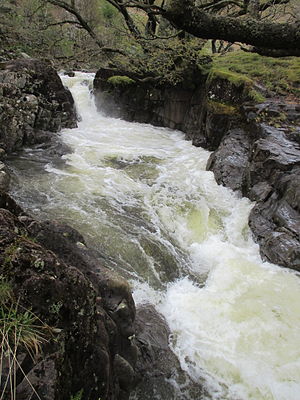 Stonethwaite Beck is a minor river in Cumberland and a tributary of the River Derwent in the midst of the county, surrounded by the grandeur of the Borrowdale Fells of the Lake District.

The Langstrath Beck, which becomes the main stream of the river, rises in two gills, from Angle Tarn and Esk Hause, close to the border with Westmorland and within a mile or two of Scafell Pike and Bow Fell, thence running north-eastwards. The Stonethwaite Beck is formed at the confluence of Langstrath Beck and Greenup Gill beneath Eagle Crag, at 'Smithymire Island', and from here the beck runs north-westwards.

Shortly below Smithymire Island, the Stonethwaite Beck tumbles over a waterfall, Galleny Force, then runs on past the villages of Stonethwaite and Rosthwaite, to empty into the Derwent in Borrowdale.

The Cumbria Way long distance walking route follows the beck for most of its journey; crossing the county border from Westmorland, from the Langdale Fells to the Borrowdale Fells, and joining Langstrath Beck its it upper reaches. It then follows all the way down to Borrowdale.