From Wikishire
(Redirected from Langdale Fells)
Jump to: navigation, search 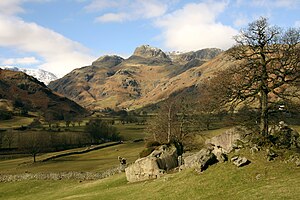 The Langdale Pikes are a group of peaks on the northern side of Langdale, a breathtaking valley in Westmorland. The Pikes are one of the best known features of the dale.

From below, the Pikes appear as a sharp rocky ridge, though they are only precipitous on their southern side; to the north, the land sweeps gently to High Raise, the parent peak of the range. The Pikes themselves include (from west to east):

Pike of Stickle, also known as Pike o’ Stickle, reaches a height of 2,326 feet. Despite the peaked profile the summit is wide enough for a sizeable cairn surrounded by a small level area. Loft Crag and Gimmer Crag steal the attention in the foreground while Bowfell impresses across Langdale. A wide swathe of the Southern Fells is in view, whilst even distant Skiddaw puts in an appearance.[1]

Loft Crag stands at 2,238 feet between Harrison Stickle and Pike o’ Stickle and is usually climbed in conjunction with these two peaks. The fell has a small sharp summit below which rises Gimmer Crag, which is one of the top rock climbing venues in the Lake District, pioneered in the early 1880s by the father of British rock climbing Walter Parry Haskett Smith.[1][2][3] 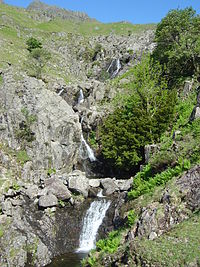 A waterfall in Stickle Ghyll

Harrison Stickle is the high point of the Langdale Pikes and its crags fall south and east from the summit, presenting an arresting view from the valley floor 2,000 feet below, or from further afield. To the north, the main ridge of the central fells passes over Thunacar Knott before climbing to High Raise. The craggy eastern face of this ridge continues north as far as Harrison's near neighbour, Pavey Ark, visually the most impressive face in the area. The south western border of Harrison Stickle is formed by the deep ravine of Dungeon Ghyll, which cuts through the parapet of the Langdale Pikes and into the lower hinterland of Harrison Combe. Across the Ghyll westwards are Thorn Crag, Loft Crag and finally Pike of Stickle. Below the steep eastern face of Harrison Stickle lie Stickle Tarn and its Ghyll, thus ensuring that all drainage from the fell is to Great Langdale. The tarn is a water filled corrie about 50 feet deep, enhanced by a dam, and providing drinking water to the hamlets of Great Langdale.[4]

Pavey Ark is 2,297 feet high. Its main face is a little over a quarter of a mile across and drops about 400 feet. To the south west it merges into the crags of Harrison Stickle, while the northern end peters out into the valley of Bright Beck. Stickle Tarn is wholly within the territory of the Ark, a corrie tarn which has been dammed to create additional capacity. The stone faced barage is low enough not to spoil the character of the pool, and the water is used for public consumption in the hotels and homes below. The tarn has a depth of around 50 feet.[4]