Stokenchurch is a village in the very east of Oxfordshire. It lies amongst the Chiltern Hills, some three miles south of Chinnor, and six miles west of High Wycombe in Buckinghamshire. The village is a popular place to live, due to its rural location and ease of access to London and Birmingham, for despite its rural feel, it stands close to the M40 motorway, on which it has its own junction.

The main landmark in Stokenchurch is The King's Hotel (formerly The King's Arms Hotel), where King Charles II is reputed to have stayed in the 17th century. There is a parish Church, the church of St Peter and St Paul, and a Methodist church, shops, several village pubs, a library, and slowly growing residential areas, along with surrounding farmland, complete this village bisected by the main A40 road.

Stokenchurch is one of the main places in the United Kingdom where one can regularly see the red kite, a formerly endangered species whose numbers are now recovering well, though still in isolated pockets such as the Chilterns and West Wales. They were reintroduced to the area by the RSPB and English Nature with assistance from Paul Getty, the American millionaire and philanthropist, who allowed use of the Wormsley estate.[1] In clear weather more than 20 may be seen at one time, in Stokenchurch particularly as many residents put food out for them. The best place to view the Red Kites is from the nature reserve at Aston Rowant, just west of Stokenchurch off the A40.

The village name is from the Old English language, although there is a difference of opinion among scholars as to its original meaning. Patrick Hanks suggests on the basis of a 13th century manorial record naming the village Stockenechurch that the name came from stoccen + cirice, literally "logs church". Thus he argues that once the village's church was made from logs.[2] However Starey and Viccars, in their study of the village point to the geography of the local area and the fact that in 1086 Stokenchurch was a woodland in the chapelry of Aston Rowant.[3] They present the Hanks opinion as a credible origin however argue that due to the geography the name is more likely to come from the alternative meaning for the Anglo Saxon word stocc, which is an outlying farm or secondary settlement.[3]

The guide to the Parish Church, on sale in the church in the late 1970s mentions a battle fought between the locals and Danes on nearby Beacon Hill in the year 914. It is said that where juniper grows blood has been spilt - there is certainly lots of juniper on Beacon Hill.

The location of the village, (being on the main London to Oxford Road) proved a good resting and changing place for horses. For this reason in the English Civil War it was commonly used as a resting place for both Royalist and Parliamentarian troops.[4] Being between Royalist Oxford and Parliamentarian London the village is mentioned no less than twelve times in the journal of Scoutmaster General Sir Samuel Luke between 1643 and 1644,[4] and on two occasions (on 5 December 1642 and 17 June 1643) skirmishes broke out when both sides arrived at the village together.[5]

The original road is now a bridleway, called Colliers Lane (in original local dialect Coiyers Lane); the current road having been constructed in 1824. It was the use of the village as a stopping point that led to many of the pubs and inns being established.

Stokenchurch was once a centre for chair making, with much of the wood used felled locally. By the 1930s there were seven or eight firms making chairs for sale to major furniture makers. Nevertheless, the village was not overly rich, being largely based on a farming community. 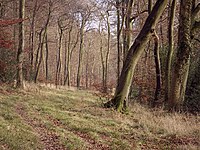