Staylittle is a small village in Montgomeryshire, set in the shallow upland basin of the River Clywedog on the B4518, equidistant from Llanidloes and Llanbrynmair.

Its name is from that of an inn which once stood here. Its Welsh-language name is Penffordd lâs meaning "Head of the lane" but it is also referred to colloquially as Y Stay or Y Stae.

A cluster of Bronze Age burial mounds and a flint scraper found in the area provide significant evidence of possible settlement and land use, probably seasonal, in the late Neolithic and Bronze Age.[1]

Local place-names suggest that during the Middle Ages the land was grazed, and any dwellings here were seasonal; a number of place-names contain the element hafod, meaning "summer dwelling" or "shieling". Much of the land was seasonally waterlogged, leaving it suitable only for upland summer grazing.[2] 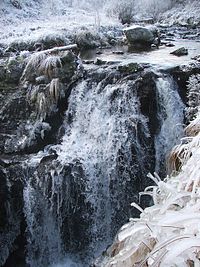 Severn Break-its-Neck Waterfall, to the south

Those lands a little further south, close to Cwm Biga, were granted to the Cwmhir Abbey by Gwenwynwyn in about the same period. The two Cistercian houses were often in dispute over these lands. On the dissolution of the monasteries the land in the possession of Cwmhir Abbey passed into the hands of Robert Dudley, Earl of Leicester. On his death in 1588 he bequeathed them to University College, Oxford, which owned them until 1920.

One of the important historical routes through Montgomeryshire passed through the area. It is thought that the Roman road from Caersws to a nearby Roman fortlet passed through what is now the village. It also lay on the drovers' road - later to become a turnpike - between Machynlleth and Llanidloes.

Inns and blacksmiths' forges were often established along such routes and it is said that Staylittle village derives its name from such an inn, the Stay-a-little Inn.[3] One local legend has it that the two blacksmith brothers working in the smithy attached to the inn were able to shoe horses so quickly that travellers only had to 'stay-a-little' before being able to continue on their journey and it was thus that the inn, and subsequently the village, acquired its name.

Staylittle as a village probably was in existence by the early 18th century. The study of the area by CPAT [1] argues that this was, '...probably due to its position on the edge of unenclosed common land roughly midway between Llanidloes, Machynlleth and Llanbrynmair.'

In 2017 the village was in the news when it was finally connected, by way of a new aerial, to mobile telephone signals and a broadband internet connection.[4]

'...the major focus of the movement had moved from Efyrnwy valley and Dolobran to the farmhouse of Esgair - goch, near Staylittle, where penurious but persevering John Goodwin and his wife strove valiantly to save Quakers from extinction.'

Later, in the 19th century, Staylittle played an important role in the provision of non-conformist places of worship - Baptist and Methodist (originally at Rock Villa) for the nearby farming and mining communities.[1]

Though Staylittle was not a mining village it owed some of its population growth, in the Victorian period, to the importance of lead mining in the area. From 1851 its population grew steadily if not spectacularly with people migrating from out of the area to work in the nearby mines of Dylife and Dyfngwn.[1]

After 1881 with the decline of lead mining the population of the parish Trefeglwys, in which Staylittle is found, declined rapidly, dropping by over 30% in the course of 20 years. Many of the men who left the area did so to find work in the South Wales coalfields. 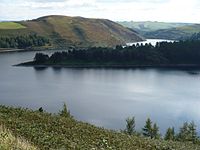 To the south of the village lies the Clywedog Reservoir where the Clywedog Sailing Club sails. Similarly, angling is available for the Llanidloes and District Angling Association.

There are many opportunities to walk and cycle in the area. The National Cycle Route NCR 8 and the long-distance footpath Glyndŵr's Way pass through Staylittle.

The council maintains an Outdoor Pursuits Centre in Staylittle.