St John's is a small village in the sheading of Glenfaba on the Isle of Man, in the island's central valley.

Tynwald Hill, the original assembly place for the Isle of Man's parliament, Tynwald, is in the village. While Tynwald now meets in the island's modern capital, Douglas, Tynwald Hill is still the scene of the annual ceremony in which the laws of the Isle of Man are promulgated in English and Manx, usually on 5 July. The day of the ceremony, known as Tynwald Day, attracts thousands of spectators to watch the ceremony and participate in the Tynwald Fair. 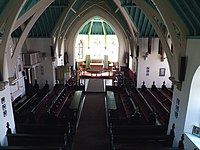 The village's church, within the Church of England, is the Church of St John; the village takes its name from the church. Within the church are reserved seats with name plaques for members of both branches of Tynwald, whilst in the adjacent church hall is an exhibition detailing the history of Tynwald.

The village is dominated by Slieau Whallian, a steep hill to its south. The Tynwald National Park (also known as the Arboretum) is situated on the east side of the village.

Opposite the church is the site of the ancient pound where stray animals were placed until claimed. If unclaimed after a year and a day they became the property of the Lord of Mann, whilst the recovery fee for reclaimed animals was shared equally between the Lord of Mann and the pound official, the "pindar".[1] Also displayed on that site are large stones from a 2300 BC burial chamber found locally.

The main commercial venture of the village is Tynwald Mills, which claims to be the only department store in the island.

Since 2003, the former St John's School building has been used by the Bunscoill Ghaelgagh (the Manx language primary school).

The village is on the main A1 Douglas to Peel road. It is also close to the junction with the A3, which leads in a southerly direction to Foxdale and Castletown, and northerly to Kirk Michael, Ballaugh, Sulby and Ramsey. It is thus conveniently located for access from all parts of the island (even before these roads were built), which is believed to have been a consideration in the original location of Tynwald here.