The centre of town is dominated by Castle Rushen, a well-preserved castle.

Castletown and can trace its roots back to 1090. The town has narrow streets and small fishing cottages. Fishing boats still continue to go out to fish from the harbour. Commercial traffic to the port ended in the 1970s, although there has been an ongoing expansion of finance and industrial businesses in the area.[1]

This was the capital of the Isle of Man and site of Tynwald until the capital was moved to Douglas in 1869.

The first telephones appeared in Castletown in 1901.

Castletown is, along with Douglas, Peel and Ramsey, one of four places on the island with the status of a town. It is also a constituency electing member to the House of Keys.

Aerial View (from the west)

The town lies on the north-west side of Castletown Bay. The opposite shore of the bay is the west coast of the distinctively-shaped Langness Peninsula.

To the north-east are Ronaldsway Airport and industrial zone, and the village of Ballasalla; to the north-west the villages of Ballabeg and Colby; and to the west Port St Mary and Port Erin.

The town has several car parks including one above the harbour close to the old school house, to the rear of the Castle Arms and off Victoria Road as well as dedicated parking for the local bank, supermarkets and the railway station. The southern end of the Millennium Way long-distance footpath is at Castletown. 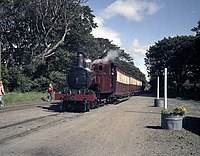 No. 4 Loch at Castletown Station

The town is served by Castletown Railway Station which forms part of the sole remaining section of the Isle of Man Railway, a 3 ft narrow gauge steam-operated railway from Douglas to Port Erin. The station is on the north-easterly edge of the town next to Poulsom Park and playing fields, and was at one time used to transport beer from the Castletown Brewery as well as cattle and other livestock; remnants of the cattle dock are still visible at the station which is open seasonally between March and November as well as weekends at Christmas.

There is a small volunteer group, the 'Friends Of Castletown Station' who tend to the area in association with the Isle of Man Steam Railway Supporters' Association, a local charity.

The island's only commercial airport, Ronaldsway Airport is just over one mile north-east of the town. The airport was first used as an airfield in 1928 with passenger services to the mainland commencing in 1933 and since this time it has become the premier air facility on the island. 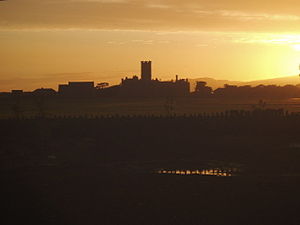 King William's College is an independent school in the town, founded in 1833 by the Bishop Barrow Trust, itself founded in 1668. It opened with 46 boys and it is now co-educational, with about 500 pupils. The college has two sites in the town: the main estate is near the shore of Castletown Bay at the end of the main airport runway, and the Buchan School, the College's junior school, is in the Westhill area of Castletown, about a mile from the main campus. 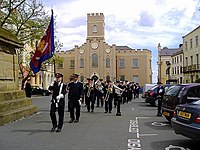 On the town square is the old parish church, and was known as St Mary's or the Garrison Church. It is now known as Old St Mary's and used as office accommodation. Its spire was lost in the early 1900s.

The current parish church, "new" St Mary's, stands on the harbour. It is known as "St Mary's on the Harbour", and was consecrated as a church in 1985.[2]

Further afield is Malew Church, just over a mile north of the town on the A4 road towards St. John's, a road which forms part of the Billown Circuit. This has its own graveyard, unlike the churches in the town; the road which doglegs around the church grounds has the title Church Bends on the racing circuit.

There is also a private chapel at King William's College, which was built in 1878, consecrated 28 January the following year. Designed by local architect James Cowle it features a scissor-braced roof with canopied stalls. Two-sided windows commemorate T.E.Brown, an old boy of the college. 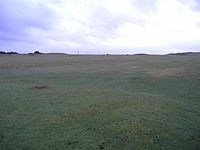 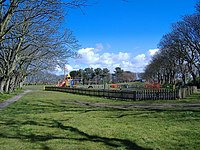 This annual event takes place in the middle harbour; it is organised by the Castletown Ale Drinkers Society and sponsored by local breweries, with support from the Isle of Man Department of Community, Culture and Leisure and further sponsorship from local radio station Three FM. It raises money for local charities. Each year there are over 100 competitors and teams from the Isle of Man and elsewhere. In 2011 the event celebrated its 40th anniversary. 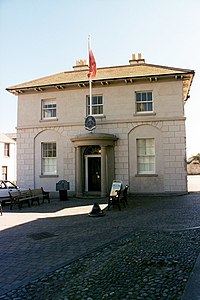 The Old House Of Keys, Castletown

Much of the attraction of Castletown is in the quality of its period buildings, many constructed of the local silver-grey limestone. The layout of the town centre still retains its early arrangement, echoing the cluster of houses around the military parade ground, which still has its alternative use as market place. The interested visitor can still identify the original building plots, and the crofts attached to them, which have given their name to a residential area close to the town centre.