Peel is a town on the Isle of Man, in the parish of German and the Glenfaba Sheading.

Peel is often called the island's only "city" because it is the home of the island's cathedral.[1] It is the third largest town on the island, exceeded only by Douglas and Ramsey, or the fourth as the village of Onchan exceeds it too.

The town’s name in the Manx language is ‘’Purt ny hInshey’’ meaning simply “Port of the Island”. 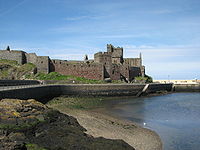 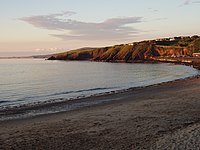 Peel is situated on the west coast of the Isle of Man, just east of the mouth of the River Neb. To the north west is St Patrick's Isle, connected to the mainland by a causeway, and to the west is Peel Hill.

The A1 road connects Peel with Douglas. The A3 road connects it with Kirk Michael and Ramsey. To the south of Peel is Castletown which was the old Manx capital, and to the east is Douglas.

Peel has never been the capital of the island but it is the ecclesiastical capital as Peel Cathedral is the seat of the Bishop of Sodor and Man. Peel is also the island's main fishing port.

Peel is sometimes referred to as the rose red city due to the red sandstone used to build the castle and other important buildings.[2] As it is in the west, it is also called the sunset city. Peel is a popular seaside destination for Manx residents and visitors in summer. It has narrow streets of fishermen's cottages and a Victorian promenade which was built on reclaimed land and a small construction line built for this purpose, as well as sandy beaches. Often at least one seal can be seen in or close to the harbour. For many years the main industries in the town were fishing, trading and shipbuilding.

There is evidence of local settlers in the Mesolithic Age on both St Patrick's Isle and the nearby Peel Hill, and Neolithic farmers are believed to have settled in the area. About 550, a Celtic monastery was founded on St Patrick's Isle.[3]

Norsemen first came to Mann around the year 800AD, and ruled the Isle for four-and-a-half centuries before finally ceding it to the King of Scotland in 1266.[4] Norsemen settled in Peel with the harbour on the River Neb used as a shelter for their longships. In 1228 Olaf the Black, King of Mann and the Isles, beached his fleet in the inlet. It was attacked and burned by his half-brother Ragnald. In 1266, as dictated in the Treaty of Perth, Norway's King Magnus VI ceded the Isle of Man to Scotland. The island came under English control in the 14th century.[1]

The town of Peel developed on the east bank of the river and the settlement was known as Holmtown until the 17th century, with the earliest recorded habitation having been in the 13th century. Further development, apart from the late 19th century guest house building on the sea front, has been inland, away from the coast. Peel Castle would eventually become a joint seat of government with Castle Rushen until the mid-17th century.

The name Peel was given to the castle and the settlement then became Peeltown until about 1860. By the time the local councils were established in 1883, the name Peel referred to the town rather than the castle. In the 19th century schooners built in Peel traded around north-west Europe and Peel fishing boats fished around the island and further afield to the southern coast of Ireland and near to Shetland. The harbour and breakwater were gradually improved, with much of the local income being from the export of salted herring. By the 1880s, fishing was the main employer with about 3,000 men and boys employed, with ancillary businesses such as shipbuilding providing employment to hundreds more. However, with what is now seen as over-fishing, the number of boats leaving for Ireland dwindled from 300 in 1880 to a handful by 1915.[1]

After the railway arrived in Peel in 1873, Peel started to develop as a tourist resort, with guest houses and hotels built along the shoreline and headlands, and then the promenade was added. Tourism gradually grew in the town. During First World War Knockaloe Farm, at Patrick to the south of the town, was made into an internment camp and housed up to 30,000 German, Austrian and Turkish civilians. In 1940, guest houses at one end of the promenade were requisitioned to become Peveril Internment Camp, housing those suspected of having sympathy for the Nazi regime under Defence Regulation 18B. By the late 1960s the Peel to Douglas railway line had closed and tourism saw a decline. Fishing from Peel has seen periods of upturn and decline. For a number of years the annual Viking Festival has attracted visitors to the resort.[1] In 1979 Odin's Raven, the replica of a Viking longship, sailed from Norway to Peel to commemorate Manx millennium at the 1000th annual sitting of the Isle of Man's Parliament, Tynwald.

In 2005, a new floodgate was installed at Peel to retain the waters of the River Neb and thus enable the moored boats to float at low tide.

Peel is the birthplace of the Peel microcars made by the Peel Engineering Company in the 1960s, the only Manx cars ever built.

There have been a number of Methodist chapels in Peel. The first one was Shore Road Wesley Methodist Chapel, built in 1777. It was used as a fishing-net factory between the 1850s and 1870s, and is now the Peel Youth Centre. A Primitive Methodist Chapel was built on Kirk Michael Street in 1835. It became a public hall when the Christian Street Chapel opened and is now used,with much redevelopment as a showroom. Peel Centenary Wesley Methodist Chapel was built in 1839 on Athol Street. Peel Primitive Methodist Chapel, built in 1878 it is now converted to flats. The organ is now in Jurby parish church.[6] The Isle of Man Christian Fellowship are based at the Philip Christian Centre on Christian Street. St Patrick's Roman Catholic Church is on Patrick Street.

Things in and about the town 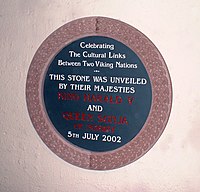 Memorial plate at House of Manannan in Peel, from King Harald V and Queen Sonja of Norway (2002)

The House of Manannan Museum was built in 1997, costing £5.5M, partly new and partly in the old Peel railway station. The museum covers the past and present of the island and houses Odin's Raven, a two-thirds scale replica of a Viking longship which had been built in and sailed from Norway, arriving on July 4, 1979 to celebrate the millennium of the High Court of Tynwald, the legislature of the Isle of Man.[7] Manx Transportation Museum, which opened in 2002, is housed in the former Brickworks building near to the harbour.[8]

Leece Museum was established in 1984 and relocated to the Old Courthouse building in East Quay in 2000. The museum is devoted to objects, photographs and documents specifically relating to the town.[9]

Peel Castle stands on a small island, St Patrick's Isle, connected to the town by a causeway. It was built in 1392 by William La Scrope.[10] Peel Castle is also a tourist attraction and it is open in summer.

Kippers have been produced in Peel since at least the 19th Century. Two kipper houses remain: Moore's Kipper Yard (established 1884) which provides tours of the factory demonstrating the preparation and smoking processes,[11] and Devereaus's (also established 1884).[12]

Peel Centenary Centre (Manx: Ynnyd Keead-Blein) is an arts and community centre based at the Centenary Hall. and closes from September and opens again in April.

Peel railway station opened on 1 July 1873, beside the harbour, as the western terminus of the Isle of Man Railway's Douglas to Peel line. The station closed to passengers on 7 September 1968. The station site is now a car park and boatyard with the station building being used as the House of Mannan Museum. The old railway line is still there and the pathway is cleared so people can walk along it, the path is close to the main road and leads on to St Johns which the path then leads on to Douglas the island's capital.[13]

The former railway line is now a long distance footpath and cycleway.[14][15]

Peel Harbour is the most active fishing port in the Isle of Man and is also used to import fuel oils. There is a fish and shellfish processing industry as well as the traditional art of kipper curing. The castle overlooks the entrance to the inner harbour, which is tidal. However a water retention scheme was built in July 2005 with a jetty from East Quay toward West Quay with an automatically operated gate-flap and a pedestrian swingbridge above it. The breakwater has deepwater berths with a lighthouse situated at the end. There is a marina where tourist boats and leisure boats are moored. Fishing boats are usually berthed on the breakwater.[16]

Peel Marina is currently under construction[17] at a cost of £3.1 million. 124 new berths are being installed by reclaiming part of the top end of the harbour for a boat park, with construction of a new harbour office.[18]

The Headlands Field has a BMX track, football pitch, park and coastal pathway. There is also a telescope on the headlands which overlooks Peel promenade. The coastal path starts on the Headlands and leads all the way to Kirk Michael beach. Also on the Headlands is the park which has swings, climbing frames and exercise machines installed into it.