St George's (formally, the Town of St George, or St George's Town) is the largest town in Bermuda, though no longer its capital. It stands on St George's Island and within St George's Parish.

The town was settled in 1612, and was the first permanent English settlement on the islands of Bermuda. It is often described as the oldest town in the English-speaking New World, though that claim is disputed by at least two claimants on the North American continent and as the first successful English settlement in the Americas: Jamestown, Virginia was established only in 1619 and St John's, Newfoundland in 1620, albeit that these had received a fortress and fishing camps earlier. St George's can at least claim to be the oldest continuously-inhabited English town in the New World. 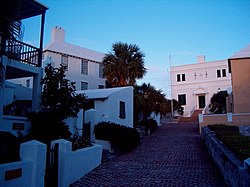 The town established here in 1612 was originally called New London. It was settled in 1612, three years after the first English settlers landed on St George's Island on their way to Virginia. Led by Admiral Sir George Somers and Lieutenant-General Sir Thomas Gates, they had deliberately steered their ship, the Sea Venture, onto a reef to escape a storm. The survivors built two new ships, the Deliverance and Patience, and most continued their voyage to Jamestown, but the Virginia Company laid claim to the islands, which they named "The Somers Islands".

Two men from the Sea Venture remained behind to maintain the company's possession of the archipelago, and a third joined them when the Patience returned later that year. By the Virginia Company's Third Charter in 1612, the boundaries of the new colony were extended out to sea to include Bermuda. The company sent a party of 60 new settlers to Bermuda to join the three men left behind by the Sea Venture. After a brief period on neighbouring St David's Island, the settlers started building structures at St George's, which stands in a sheltered sound that kept ships protected from bad weather.

St George's served as the colony's capital and was the home of its parliament from 1620, which sat at the State House. The capital was moved in 1815 to Hamilton.

The town was closely linked to the history of colonial America. Ten thousand Bermudians emigrated, primarily to Virginia and the American Southeast, before United States independence made them citizens of separate nations. Branches of wealthy Bermudian merchant families dominated trade in the area's ports. Bermudians settled towns in the South, and contributed greatly to the make up of the populations of several US states.

As Bermuda's population centre, and only true port during this period, St George's was particularly connected to development in the North American colonies. During the American War of Independence, at the request of George Washington, Bermudians assisted the American rebels in stealing much-needed gunpowder from a St George's magazine, which supplied the forts protecting the port. The powder was carried over the hill to Tobacco Bay, whence boats transported it to an American ship that lay offshore.

During the American Civil War, some Britons from St George's evaded coastal blockades to provide supplies and munitions to the desperate Confederates. This trade was based in St George's. 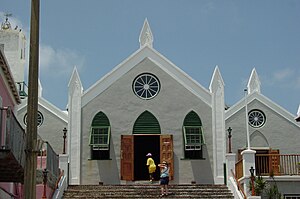 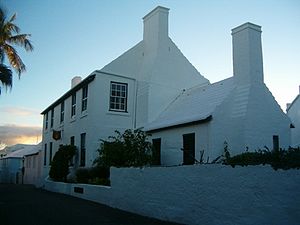 Ordnance Island in St George's Harbour, lies south of King's Square. It holds a replica of the Deliverance (one of the two ships built by the survivors of the Sea Venture), and a life-sized statue of Admiral of the Virginia Company, Sir George Somers, by Desmond Fountain. Somers, along with Sir Thomas Gates, had led the survivors of the 1609 wreck.

The town has numerous historical sites, such as the old State House from 1620. Other than fortifications, this was the first stone building in Bermuda, built to house the Parliament. It is the oldest building on the island. Others of note are the Unfinished Church, the Old Rectory, St Peter's (the oldest surviving Anglican and oldest continuously occupied Protestant church in the Western hemisphere), the Tucker House, the Bermuda National Trust Museum, and the St. George's Historical Society Museum and the Featherbed Alley Printshop museum (both in the Mitchell House).

In 1996, the town was twinned with Lyme Regis in Dorset, the birthplace of Admiral Sir George Somers.

In 2000, the town, together with numerous surrounding fortifications, including the Castle Islands Fortifications, was designated as a UNESCO World Heritage Site, formally known as the "Historic Town of St George and Related Fortifications".