Tristan da Cunha is a remote volcanic island in the South Atlantic Ocean which forms part of the British overseas territory of St Helena, Ascension and Tristan da Cunha. Its name applies likewise to the group of islands of which Tristan itself is the main, and only inhabited island. Tristan is reckoned the most remote inhabited archipelago in the world,[1] lying 1,750 from the nearest land, South Africa, and 2,088 miles from South America.

The Tristan da Cunha group consists of the main island of Tristan da Cunha itself, which measures about 7 miles across and has an area of 37.7 square miles, along with the uninhabited Nightingale Islands and the wildlife reserves of Inaccessible Island and Gough Island.

The flag of Tristan da Cunha 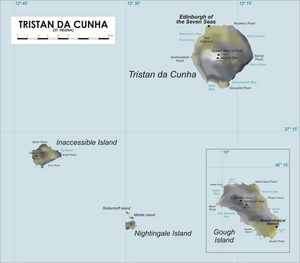 The name "Tristan da Cunha" is used for the main island and also used for the archipelago, which consists of the following islands:

Inaccessible Island and the Nightingale Islands lie 22 miles to the southwest of the main island of Tristan, while Gough Island lies 245 miles south-southeast.

The main island of Tristan da Cunha is quite mountainous; the only flat area is the location of the capital, Edinburgh of the Seven Seas, on the north-western coast. The highest point is a volcano called Queen Mary's Peak at 6,765 feet; it is covered by snow in winter. The climate is marine subtropical with small temperature differences between summer and winter and between day and night. The other islands of the group are uninhabited, except for the weather station on Gough Island, which has been operated by South Africa since 1956 (now at Transvaal Bay on the south-eastern coast), with a staff of six. Tristan da Cunha is the nesting place of Tristan albatrosses.

Tristan da Cunha is thought to have been formed by a long-lived centre of upwelling magma called the Tristan hotspot. 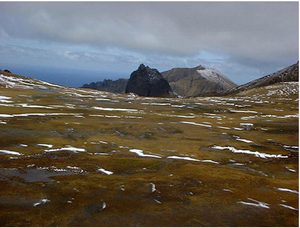 The endemic Tristan thrush (Nesocichla eremita) or starchy occurs on all of the northern islands and each has its own subspecies, with Tristan birds being slightly smaller and duller than those on Nightingale and Inaccessible. In 1956 eight Gough moorhens (Gallinula comeri) were released at Sandy Point, on Tristan

The islands were first sighted in 1506 by Portuguese explorer Tristão da Cunha, although rough seas prevented a landing. He named the main island after himself, Ilha de Tristão da Cunha, which was later anglicised to Tristan da Cunha Island.

The first survey of the archipelago was made by the French frigate L'Heure du Berger in 1767. Soundings were taken and a rough survey of the coastline was made. The presence of water at the large waterfall of Big Watron and in a lake on the north coast were noted, and the results of the survey were published by a Royal Navy hydrographer in 1781. The first permanent settler was Jonathan Lambert, from Salem, Massachusetts, who arrived at the islands in December 1810.[5] He declared the islands his property and named them the Islands of Refreshment. Lambert's rule was short-lived, as he died in a boating accident in 1812.

In 1816 the United Kingdom formally annexed the islands, ruling them from the Cape Colony in South Africa. This is reported to have primarily been a measure to ensure that the French would not be able to use the islands as a base for a rescue operation to free Napoleon Bonaparte from his prison on St Helena. The occupation also prevented the United States from using Tristan da Cunha as a base, as they had during the War of 1812. Attempts to colonise Inaccessible Island failed.

The islands were occupied by a garrison of British Marines, and a civilian population was gradually built up. Whalers also set up on the islands as a base for operations in the Southern Atlantic. However, the opening of the Suez Canal in 1869, together with the gradual move from sailing ships to coal-fired steam ships, increased the isolation of the islands, as they were no longer needed as a stopping port for journeys from Europe to the Far East. 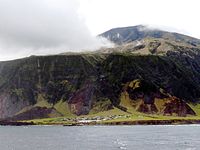 Edinburgh of the Seven Seas

In 1867, Prince Alfred, Duke of Edinburgh and second son of Queen Victoria, visited the islands. The main settlement, Edinburgh of the Seven Seas, was named in honour of his visit. Lewis Carroll's youngest brother, the Rev. Edwin H Dodgson, served as an Anglican missionary and school teacher in Tristan da Cunha in the 1880s. The second Duke of Edinburgh, the husband of Queen Elizabeth II, visited the islands in 1957 as part of a world tour onboard the royal yacht Britannia.

On 12 January 1938, by Letters Patent, the islands were declared a dependency of St Helena, which they remained until the 2009 Constitution.

During Second World War, the islands were used as a top secret Royal Navy weather and radio station codenamed HMS Atlantic Isle, to monitor U Boats (which needed to surface to maintain radio contact) and German shipping movements in the South Atlantic Ocean. Islanders labouring to construct the station were paid in kind with naval supplies for their own use, such as wood, paint and tea. Money was introduced the following year, as was the island's first newspaper, The Tristan Times. The first Administrator was appointed by the British government during this time.

In 1961, a volcanic eruption forced the evacuation of the entire population to wooden huts in the disused Pendell Army Camp in Merstham, Surrey, before moving to a more permanent site at a former Royal Air Force station in Calshot near Southampton, living mainly in a road called Tristan Close. In 1962, a Royal Society expedition went to the islands to assess the damage, and reported that the settlement Edinburgh of the Seven Seas had been only marginally affected. Most families returned in 1963 led by Willie Repetto (head of the ten-man island council) and Allan Crawford (the former island welfare officer).

In 2005, the islands were given a United Kingdom post code (TDCU 1ZZ) to make it easier for the residents to order goods online.

All Tristan families are farmers, owning their own stock. All land is communally owned. Livestock numbers are strictly controlled to conserve pasture and to prevent better-off families from accumulating wealth. No outsiders are allowed to buy land or settle on Tristan.[6]

The islands' main source of foreign income is the lobster factory and the sale of postage stamps and coins to overseas collectors. Most people have dual occupations, often working for the local government. Many inhabitants have plots of land (at the patches) on which they grow potatoes.

The 1961 volcanic eruption destroyed the Tristan da Cunha canned crayfish (spiny lobster) factory, which was rebuilt a short time later. The crayfish farmers work for the South African company Ovenstone, which has an exclusive contract to sell crayfish to the United States and Japan. Even though Tristan da Cunha is a British overseas territory, it is not permitted direct access to European Union markets. Recently the decline in interest in Tristan crayfish in the United States has meant that the islanders have had to borrow from their reserves. The islands' financial problems may cause delays in updating communication equipment and improving education on the island.

The school on the island is the St. Mary's School, which has children from ages three to sixteen. The current facility, which opened in 1975, has five classrooms, a kitchen, a stage, a computer room, and a craft and science room.[7]

The islands have a population of 264 people.[8] The main settlement is Edinburgh of the Seven Seas (known locally as "The Settlement"). The only religion is Christianity, with denominations of Anglican and Roman Catholic. There are instances of health problems attributed to endogamy, including asthma and glaucoma.

The current population is thought to have descended from 15 ancestors, eight males and seven females, who arrived on the island at various times between 1816 and 1908. The male founders originated from Scotland, England, The Netherlands, the USA and Italy.[9] There is a very high incidence of asthma among the population and research by Dr. Noe Zamel of the University of Toronto has led to discoveries about the genetic nature of the disease.[10] Three of the original settlers of the island were sufferers.[11]

The remote location of the islands makes transport to the outside world difficult. There is no airport, so the islands can be reached only by ship. Fishing boats from South Africa regularly service the islands. The RMS St Helena connects the main island to St Helena and South Africa only once during its February voyage. There is no direct service to Ascension Island and the United Kingdom, without flying from Cape Town to London or a short stay on St Helena, since the March voyage of the RMS St Helena continues to Ascension and Portland. 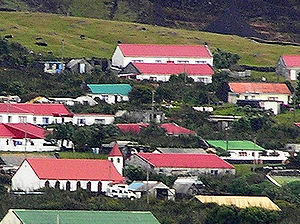 Healthcare is free, but, with just one resident doctor from South Africa and five nurses, the delivery and surgery are limited and serious injury can necessitate sending signals to passing fishing vessels, so that the injured person can be transferred to Cape Town.

Television did not arrive on the island until 2001, and the sole channel available is the British Forces Broadcasting Service from the Falkland Islands. Education is rudimentary; children leave school at fifteen, and although it is possible to take GCSEs a year later, results are poor.[13][14]

Tristan da Cunha's isolation has led to an unusual, patois-like dialect of English.

"Recipes from Tristan da Cunha: Simple Food for all to Enjoy", a book by Dawn Repetto published in 2010, details the unique cuisine and rich cultural heritage of Tristan da Cunha (National Library of New Zealand Catalogue).