Inaccessible Island is an island of the South Atlantic Ocean, 28 miles southwest of Tristan da Cunha, within the British overseas territory of St Helena, Ascension and Tristan da Cunha.

Inaccessible is an extinct volcano, last active six million years ago. It rises to its summit at Cairn Peak reaching 1,473 feet above sea level.[1] The island is 5 square miles in area.

Along with Gough Island (also in the Tristan da Cunha Group), Inaccessible Island is a protected wildlife reserve which has been designated as a United Nations-controlled World Heritage Site by UNESCO. 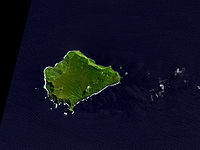 Inaccessible Island was first discovered in January 1656 during a voyage by 't Nachtglas, a Dutch ship under the command of Jan Jacobszoon, 146 years after Tristan da Cunha was first sighted by Portuguese sailors. Jacobszoon originally named it 'Nachtglas' island.

There are two explanations for the name 'Inaccessible' island. One is that on maps the newly found island was referred to as "inaccessible" because the Dutch crew who landed were not able to get further inland than the beach, as they were blocked by 1000-foot high cliffs. The other claims that French captain d'Etchevery renamed the island in 1778 after not being able to land.[2] 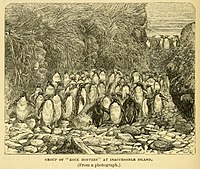 Rockhopper Penguins on Inaccessible Island, drawn by the naturalist aboard HMS Challenger

Notwithstanding the name, some sailors have landed on the island:

At least three confirmed shipwrecks have occurred off the coast of Inaccessible Island.

The first, and most dramatic, was that of the Blenden Hall, a British ship chartered to the East India Company, which set sail in 1821 with 84 passengers and crew aboard. Intending to sail past St Helena, it was carried instead towards Tristan da Cunha due to adverse currents. It ran aground on Inaccessible Island and suffered a broken back, but the forecastle was carried inshore. All but two of those aboard survived the shipwreck, and, subsisting on wild celery, seals, penguins, and albatross, managed to build boats some months later. The first attempt to sail to Tristan failed, resulting in the loss of six people, but the second attempt alerted the Tristanians to their plight. The remainder were then brought to Tristan, where most of them were later taken away by a brig to Cape Town.

The other two shipwrecks are the wreck of the Shakespeare at Pig Beach in 1883 and the Helen S Lea at North Point in 1897.

When Corporal William Glass and his family became the first settlers at Tristan da Cunha in 1816, goats and pigs were brought to Inaccessible Island to serve as a source of food. They remained there for at least 57 years and helped to keep the Stoltenhoff brothers alive during their expedition, but they have now died out. Cattle, sheep, and dogs were also introduced to the island at various points in the island's history, but none remain.

No land mammals, reptiles, amphibians, butterflies, or snails have recently been found at Inaccessible. The island does have 64 native plant species, including 20 types of flowering plants and 17 species of ferns. In addition, 48 invertebrate species exist on the island, 10 of which were introduced.[6] Subantarctic Fur Seals and Southern Elephant Seals have also been seen at the island in increasing numbers, and whales live in the surrounding waters. 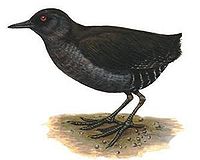 Inaccessible Island has been used by the islanders of Tristan da Cunha for several economic purposes. The island has guano deposits and eggs, but due to the difficulty of travelling about the island, the islanders have generally chosen to go to Nightingale Island instead. However, three company ships fish off the coast of Inaccessible. They are permitted by the Tristan da Cunha Annex Penumbra of 1945 to fish up to 3,000 metres from shore.