St David's Island is one of the main islands of Bermuda. It is located in the far north of the territory; one of the two similarly sized islands that make up the majority of St George's Parish.

The island was originally 503 acres in size. Then in 1942, during the Second World War, the island was enlarged by reclamation, and by absorbing Long Bird Island and Cooper's Island, to 650 acres, in order to allow room for an American military base (originally the US Army's Fort Bell/Kindley Field]], operated jointly during the war with the Royal Air Force). This was later renamed as Kindley Air Force Base and USNAS Bermuda, which occupied more than half the island's land under a 99-year lease. 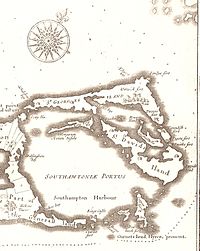 The base was closed in 1995 and returned to the Crown. Much of its set of facilities is used as part of L F Wade International Airport. Cooper's Island is now attached physically to south-east St David's, although the two islands are still widely regarded as separate entities.

The island was named by British colonists in honour of St David, the patron saint of Wales, as the similarly sized St George's Island to the north, had been named for the patron saint of England. The two islands are separated by two bodies of water - Ferry Reach in the south-west and St George's Harbour in the north-east. St David's is separated from the Bermudian mainland by the waters of Castle Harbour in the south, but is joined to it by road by way of The Causeway.

St David's Island is connected to the United States by an Atlantic fibre optic cable known as '360 Americas'.[1]

As with the rest of Bermuda, the St David's islanders were established from a diverse group of immigrants, beginning in the 17th century. These included indentured servants from Great Britain and Ireland, Spanish-speaking Blacks from the West Indies, and Black Africans and Native Americans. Although hundreds of Native American slaves were absorbed into the total population of Bermuda, some Bermudians have long referred to St David's islanders (disparagingly) as 'Mohawks' – in fact only two Mohawk boys were recorded as having been imported to Bermuda (following Dutch-Mohawk wars) but to many English in the late 17th and 18th centuries, the Mohawk were the best-known Native American people, as they were a powerful tribe in eastern New York and the name became applied to any North American Indian.

Today, many St David's islanders are proud to be called Mohawks. They are actively re-establishing links to the Wampanoag, Pequot and other Algonquian nations that contributed the most members to Bermuda's early settlement. Since the joining of the Island to the rest of Bermuda by the US Army in the 1940s, the former relative isolation of St David's has ended. The subsequent influx of other Bermudians to what is seen as a more affordable part of Bermuda to buy property, which increased dramatically after the closure of NAS Bermuda in 1995, has eroded the unique character of the islands population. They were once distinguishable by accent and appearance.