St Dominic is a village in eastern Cornwall, two and a half miles east of Callington, and five miles north of Saltash. It is within the Hundred of East Wivelshire.

The historical spelling was 'St Dominick', but this has gradually changed to drop the letter K,[1] though the K persists on Ordnance Survey mapping.

The parish is named after a female saint, St Dominica. The population of the parish was 774 at the 2011 census.

The parish church is dedicated to St Dominica and has two aisles. The south aisle is the earlier of the two; the tower (of the 13th century) is of an unusual design.[2] 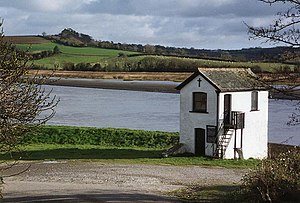 As well as St Dominic itself, which is the churchtown, the parish includes such hamlets as Burraton, Bohetheric (also known as Etheric), and Halton Quay, where there is an Anglican chapel.

Cotehele, a National Trust house and estate, is to the north of St Dominic.