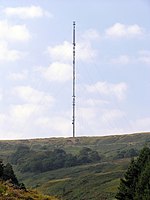 Holme Moss is a moor in the south Pennines, on the border between Cheshire and the West Riding of Yorkshire. It is just inside the boundary of the Peak District National Park.

Rake Dike rise from Kay edge on the moor and flows through the village of Holme and into Brownhill reservoir, about a mile below the moor. The upper part of the moor continues into Black Hill, the highest point of Cheshire.

The Holmfirth Harriers Athletics Club organise an annual "Holme Moss Fell Race" on and around Holme Moss in the summer. In the winter Holme Moss frequently gets a covering of snow, while the surrounding valleys do not. The top car park is a popular spot for bringing children to do sledging, or even more serious snowsports. With heavier snowfall, the road is always the first in the area to be blocked. This is not helped by two local councils needing to cooperate to keep the road clear of snow, and sometimes one will clear its side of the hill, but the snowploughs turn around at the top, leaving the other side blocked. 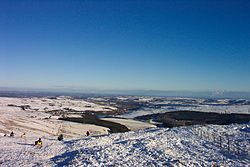 To British cycling enthusiasts, Holme Moss has become known for the climb up the Woodhead Road, the A6024, which crosses the moor, between the village of Holmbridge to the north and the Woodhead Reservoir to the south. The northern side in particular is one of England's most well-known bicycle ascents, and has acquired a reputation as among the country's more difficult climbs. From the north, the road begins to rise from approximately 620 feet above mean sea level in Holmbridge and gains steadily towards the village of Holme. The road then sweeps round to the left and thereafter the steepness increases through a series of switchbacks. A mile from the summit the gradient climbs above 14%, and remains testing until the car park near the mast is reached and the summit crested. From this side the ascent is 3 miles long at an average gradient of about 7%. It is often made more challenging by the prevailing south-westerly wind.

From the south, the road begins climbing away from the Woodhead Reservoir and the A628 road at an altitude of roughly 820 feet before briefly dropping down again. There in former years was a difficult sloping kink in a sharp valleyside angle (Heyden Bridge), but the road is now higher and easier there; after that, part of the Heyden Brook valley has been afforested with spruces. It then rises steeply at an angle up a hillside (Heyden Moor), reaching more than 14% at its steepest. The gradient eases somewhat before one final incline towards the summit at 1,719 feet, and then over a dark moor on the top. From this side, the climb is 2.7 miles long at an average gradient of about 6.4%.

Although not comparable in distance to the famous cols of European bicycle racing, the length and difficulty of Holme Moss relative to other British climbs (as well as its proximity to the large urban areas of Manchester and Sheffield) has made it a frequent and popular inclusion in British races, including the Tour of Britain. For many years the (now defunct) Leeds Classic race saw internationally renowned riders (many of them, such as Bjarne Riis, veterans of the Tour de France, hence the moniker Le Col de Moss) tackling the climb. It has also been oft-used for domestic competition in British road racing and mountain biking.