Shroton also known as Iwerne Courtney, is a village in Dorset, found just west of the main road, the A350, about four miles north-west of Blandford Forum. The town sits by the small River Iwerne between Hambledon Hill to the south-west and the hills of Cranborne Chase to the east. In the 2001 it had a population of 400.

Hambledon Hill dominates the village and was the site of an Iron Age settlement, its earthworks an ancient fortification.

Iwerne Minster is a mile to the north. Iwerne Stepleton, otherwise known as Preston, is a vanished village, represented by Stepleton House, south of Shroton.

The delightful indecision of the village about its own name has caused puzzlement amongst visitors. Maps show both name together and local bodies use both or either.

The Domesday Book lists a manor of Werne, which may be Iwerne Courtney alone, or a place conjoining Iwerne Courtney and Iwerne Stepleton. (Iwerne Minster appears as Euneminstre.) The name appears in 1244 as Yuern Curtenay the suffix from the Courtneys, who were the Earls of Devon and held the manor from the early 13th century. "Iwerne" is from the name of the little river through the village, and may be a name from the ancient British language.

The name "Shroton" is from the Old English or Middle English for "Sheriff's town" (which in Old English would be Scirgerefan tun, and indeed the Domesday Book records Iwerne as held by Baldwin the Sheriff. That version of the name first appears as Schyreuetone in 1337.

The village is far from alone in having two names; this is a habit found in Dorset. For example, East Herring is also known as Chaldon Herring and the River Trent is also the River Piddle.

Nearby Hambledon Hill was an Iron Age settlement. The Roman did not settle there but built a fort on Hod Hill and settled in the valley below Hambledon: at the beginning of the 20th century General Pitt-Rivers, an archaeologist and Lord of the Manor of Iwerne Courtney, excavated the site of a Roman villa on Park Farm.

The Domesday Book of 1086 records Werne among the lands of Baldwin the Sheriff, and that before the Norman Conquest it was held by Siward. There were two mills in the manor.

In 1261 Shroton received a grant from Henry III authorising it to hold two annual fairs and a weekly market. The fairs were held on the 3rd May and on the 14th September and while the first lapsed at some time, the Autumn fair continued into the 20th century. The Shroton Fair used to be "one of the main Dorset events of the year"[1] and was held under the hill, on the field now called the Fair Field.

Dorset-born broadcaster Ralph Wightman wrote of the fair that "For many years time was dated in this part of Dorset by Shroton Fair. Old men recalled events by the number of months they had happened before or after this event."[2] Today it is not held as once it was but has been metamorphosised into the Great Dorset Steam Fair.

The Courtneys came across with the Conqueror and in time acquired the manor, which assumed their name. Robert Courtney died at his manor of Ywern on 7 August 1242. In 1539 Henry Courtney was beheaded for treason, having been involved in a plot for a Romanist rising, and soon afterwards his son Edward Courtenay was attainted, losing Ywerne Courtney in 1541. King Henry VIII gave it to his Queen, Catherine Howard, for life. Queen Elizabeth I granted the Manor to Robert Freke, whose family retained it until a sale to George Pitt (later Lord Rivers) in 1776.

During the Civil War in 1645, a battle took place at Hambledon Hill in which the Dorset Men (Club Men who defended their villages from both sides), fought to resist Cromwell's armies. They were defeated; the dead were buried in a mass grave in Shroton's churchyard and the survivors held prisoner in the church.

In 1756 General Wolfe formed a camp at Shroton before sailing for North America, where he defeated the French and in 1759 captured Quebec, though he did not live to enter the city. This camp was at the foot of Hambledon Hill and the steep slopes of the hill greatly assisted in the training for scaling the Heights of Abraham to the city. 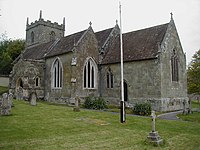 In 1870-72, John Marius Wilson's Imperial Gazetteer of England and Wales described Shroton like this:

IWERNE-COURTNAY, a village and a parish in Blandford district, Dorset. The village stands on the Iwerne rivulet, under Hambleton hill, 2½ miles ENE of Shillingstone r. station, and 4½ NW of Blandford Forum; and has a post office under Blandford. The parish includes also Farringdon chapelry and Ranston tything; and bears also the alternative name of Shroton. Acres, 1, 953. Real property, £2, 612. Pop., 620. Houses, 129. The manor belonged formerly to the Courtenays, and belongs now to Lord Rivers.[3]

Shroton is primarily agricultural. The Ranston Estate is the biggest employer and landowner in the parish, owned by and house was the seat of the Baker baronets since 1802. The first baronet was Sir Edward Baker Littlehales, afterwards Baker, who died in 1826.