Chaldon Herring or East Chaldon is a village in Dorset, high on chalk hillsides of the Chaldon Down, a hill on the coast of eastern Dorset which plunge in cliffs to the sea, and part of the Dorset Downs.

Chaldon Herring is a mile and a half from the English Channel coast and eight miles south-east of the county town, Dorchester. It had a population of 166 in 2001. 11.9% of dwellings are second homes. 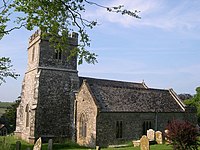 The parish church is St Nicholas and stands on a hill. Most of the church dates from the 15th century but the north wall and part of the west tower date from the late 14th century. It was restored during the Victorian era, the alterations including the addition of the south arcade.

There were once two parishes here; Chaldon Herring or East Chaldon and West Chaldon, formerly known as Chaldon Boys. Both parish churches were of the same dedication and lay so close to each other that in 1446 the Bishop united them.

Some fine Bronze Age barrows are found inthese hills, including the group known as the Five Marys.

The manor was recorded in the Domesday Book as Calvedone and Chalvedon and as having 500 sheep.

The name "Herring" is taken from the name of Harang family who owned the manor of Chaldon Herring in the Middle Ages, from at least 1166 until 1372 or letter. The family also held land and the manors of Langton Herring and Winterborne Herringston, and gave them their name too.

The lands of Grange Farm, and the manor house, The Grange, belonged to Bindon Abbey. AT the Reformation and the dissolution of the monasteries, the lands were acquired by Sir Thomas Poynings of East Lulworth.

Smuggling was once rife on the coast here; the notorious smuggling villages were Osmington Mills and West Lulworth, and the folk of Chaldon Herring were involved in the trade, as the local gaol records attest.

This building was built during Victorian times and was originally the Church School House. The school bell can still be seen at the top of it.

The Sailors Return, the village pub is a very traditional place, originally a pair of rustic Dorset cottages thatched of stone and rubble. It became an inn in the mid nineteenth century. It has shunned much modernity; it remains uncarpeted, with flagstone floors. Within the pub is one unusual feature; a pre-reformation altar stone is cemented into the floor, lying on the right of the entrance and is marked by a cross in one corner. The pub takes its name from a story of three brothers having left their village to join the Royal Navy. Upon his return, a sailor found his wife to be in the company of another man.

The Grange is the old manor house, standing to the east of the church. It was built in the thirteenth century and much of this work remains. In 1728, Richard Gostelowe made substantial alterations. The Weld family bought the house and estate in 1790 and it remained in that family until the 1970s.

In literature and the arts

Various other writers and artists lived in the village at different times:

Chaldon Herring was the inspiration for Folly Down in Theodore Powys's novel Mr Weston's Good Wine and other works.[2]