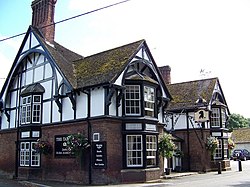 Iwerne Minster is a village and parish in Dorset. It lies on the edge of the Blackmore Vale, approximately midway between the towns of Shaftesbury and Blandford Forum. The A350 main road between those towns passes through the edge of the village, just to the west. In the 2011 census the civil parish had a population of 978.[1]

Evidence of prehistoric human activity in the parish consists of five round barrows on the chalk escarpment in the east, and the site of an Iron Age settlement in the southwest, near Park Farm. The settlement, which takes the form of several pits, was excavated by General Pitt-Rivers in 1897; finds included a bronze brooch and silver coins.[2]

In the early Roman period the Iron Age site was altered with the construction of ditches and sub-rectangular pits; finds included 1st and 2nd-century samian pottery and Roman coins dating from the period between Vespasian and Commodus. In the 3rd century a building, possibly an aisled barn, was constructed on the western half of the site; it was 111 feet long, 40 feet wide and had flint footings 3 feet wide. More Roman coins were found here, dating from the period between Gordian I and Tacitus. Around AD 300 a substantial building was constructed on the eastern half of the site; it was 125 feet long and 18 feet wide and divided into four rooms, with a granary built against one external wall and a corridor or outbuildings against another. One of the rooms had[plaster walls and a floor made of shale from Kimmeridge. The building was occupied for about sixty years.[2]

In the Domesday Book in 1086 the village was recorded as Euneministre (or Euneminstre).[3][4] It was in Sixpenny Hundred and the lord and tenant-in-chief was Shaftesbury Abbey.[5]

The early settlements in the parish—Iwerne and Preston—were sited by the River Iwerne. There may have been a third settlement contemporary with these, called Hulle. Pegg's Farm in the northwest of the parish is probably a secondary settlement; it was in existence by the early 14th century, though the present buildings are mostly 18th century.[2]

The parish church, dedicated to St Mary, has a nave, north aisle and north transept dating from the mid-12th century, though it is probable there was a minster and clergy community here before that, as indicated by the village's name and its large size in the Domesday Book.[2]

Iwerne Minster House was built in 1796 by the Bowyer Bower family (who had owned the village and estate of Iwerne Minster since at least 1645), on the site of their original manor. Their family crest, the Talbot, is still represented in the name of the village pub. Iwerne Minster remained in the Bowyer Bower family until 1876, when they sold the estate to George Glyn, 2nd Baron Wolverton. Wolverton had a new house built, designed by Alfred Waterhouse and completed in 1878. A 150-acre ornamental park, including a lake, was also created. James Hainsworth Ismay, second son of Thomas Henry Ismay, bought the estate in 1908;[6] he had a village hall, pump and shelter built, designed clothes for the village children and gave the village shops hand-painted signs, all resulting in the village having a 'model' appearance. The estate was sold in 1929 and the mansion became Clayesmore School.[7] 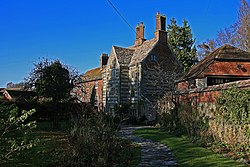 There are 44 structures in the parish that are listed for having particular historical or architectural interest. These include the parish church of St Mary (Grade I) and The Chantry (Grade II*).[8]

Iwerne Minster civil parish covers an area of 2,865 acres[2] at an altitude of about 170 to 620 ft.[9] From east to west the geology of the parish comprises chalk hills in the east, then upper greensand and gault, through to lower greensand around the Fontmell Brook in the north-west.[2] About half of the parish and most of Iwerne Minster village—the area east of the A350—is in the Cranborne Chase and West Wiltshire Downs Area of Outstanding Natural Beauty.[10]

Measured directly, Iwerne Minster village is about five miles north of Blandford Forum and the same distance south of Shaftesbury.[11]

Virginia Woolf and her husband spent five days in Iwerne Minster in April 1926; she wrote to her friend Raymond Mortimer about how, even though the appropriation of images of rural England for patriotic purposes made her "almost ashamed of England being so English", she and her husband had nevertheless been enchanted by the Dorset landscape in spring.[12] It is possible that the name of the fictional village Bolney Minster in Woolf's novel Between the Acts was partly inspired by Iwerne.[13]

A pre-Norman conquest Iwerne Minster is imagined, along with neighbouring village Shroton, in Julian Rathbone's 1997 novel The Last English King.