Semington is a village and civil parish in Wiltshire, about two miles south of Melksham and about three miles north-east of Trowbridge. The parish includes the hamlets of Little Marsh and Littleton.[2]

The village has two locks on the Kennet and Avon Canal, known as the Semington Locks, and is the start of the disused Wilts and Berks Canal.

Semington village developed along the main road from Melksham to Westbury which became the A350. In 2004 a bypass was opened, taking the A350 ½ mile east of the village.[3]

Little Marsh (or Littlemarsh) is a hamlet south of Semington, along the old course of the A350. Littleton is no longer populated, and the only area currently designated as belonging to Littleton is the roundabout at the A350 and A361 road crossing. 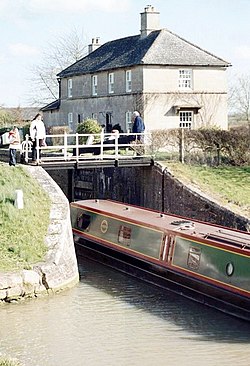 The Kennet and Avon Canal crosses marshy ground on an embankment on the northern edge of the village.

The canal, towpath and adjacent hedges are good for wildlife and in August 2007 water voles were seen.[8]

The Devizes Branch Line was built ⅔ mile north of the village in 1857. A small station (Semington Halt) was opened in 1906 where the railway crossed both the A350 and the Wilts & Berks canal; the station and the line were closed in 1966.

During the Second World War, Semington was on GHQ Line which followed the path of the canal. Semington was designated as a centre of resistance: extensive anti-tank ditches were constructed to the east, south, and west of the village, these were overlooked by a number of pillboxes. The defences were constructed as a part of British anti-invasion preparations.[9]

The Church of England parish church of St George is a Grade-II listed building.[10] It dates from the 15th century and was largely rebuilt in 1860.[11] There are regular services held in the church each Sunday and Bible Studies and Prayer Meetings held in homes of the village. It is a part of the Canalside Benefice which includes churches in Hilperton, Trowbridge. It has a garden fête every summer in the grounds of the Village School although Fêtes used to be held in the grounds of Brook House manor house.[12]

Within the village there are over 500 houses, a primary school,[13] a village hall,[14] public tennis courts and a park for children.

Semington has a pub, The Somerset Arms,[15] which is popular with canal travellers.

About ⅔ mile north of the village is Hampton Park West business park, which has the corporate headquarters of companies such as G-Plan, Avon Rubber plc and a large police operations centre.