Croft-on-Tees is a village and parish in the North Riding of Yorkshire, adjacent to the border with County Durham. It has also been known as Croft Spa, and from which the former Croft Spa railway station took its name. It lies 11 miles north-north west of Northallerton.

The village is mentioned in the Domesday Book as Crofst. It makes no mention of any lord of the manor prior to the Norman conquest, but names Enisant Musard as lord after 1086, granted to him by Count Alan of Brittany.[1] The lands were subject to many years of dispute until the 13th century. In 1205, King John settled the issue by granting the lands to Roald the Constable of Richmond. His heirs inherited the title until 1299 when they were succeeded by Henry le Scrope of Bolton. Thereafter the lands were held under the Scropes by the Clervaux family. They held the manor until 1590 when the direct male line ceased, but Clervuax inheritance continued via marriage to the Chaytor family into the 20th century.[2][3]

The etymology of the village name comes from the Old English word Croft meaning a small enclosed field.[4][5]

Croft was once significant for its spa, first noticed in 1668, and as early as 1713 the sulphurous spring water had acquired such fame that it was sold in London as a cure for ailments and diseases as described in Robert Willan's study of the sulphur water at Croft, published London 1782.[6] A.B.Granville's description of the "Old Well" and the "New Well" described the Croft Spa for which the railway station was both opened and named. was published in 1841.[7][8]

The village was once served by its railway station on the East Coast Main Line. The railway still passes near Croft but the station, which was opened in 1841, closed in 1968 and has been demolished.[9] 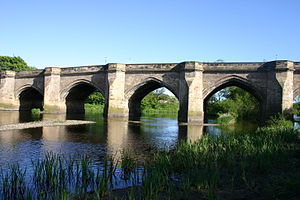 Croft Bridge carrying the A167 over the Tees

Three miles south of Darlington, Croft stands on the opposite side of the River Tees from Hurworth-on-Tees between Clow Beck and Spa Beck and is situated on the A167 road. The bridge over the Tees between Croft and Hurworth marks the county border between Yorkshire and Durham. The exact point of transition is the fourth of the seven arches.[7] It is a Grade I listed building.[11] The settlements of Eryholme and Dalton-on-Tees are also within three miles of the village.

Lewis Carroll lived in Croft from 1843 to 1850.[12][13] His father the Revd Charles Dodgson was Rector of Croft and Archdeacon of Richmond from 1843 to 1868. Carroll's photo of the niece of Alfred Lord Tennyson's wife was taken at Croft [3][4] Historians believe Lewis Carroll's Cheshire Cat in the book Alice in Wonderland was inspired by a carving in Croft Church.[14] 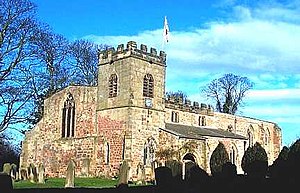 The village is served for Primary education by Croft CE Primary School which caters for ages 3 to 11 and has a capacity of 105.[15] It lies within the catchment areas of both Allertonshire School and Northallerton College and also Richmond School for secondary education.[16]

The village church, St Peter's, is a 14th-century style building situated on the bank of the Tees. It is a Grade I listed building.[18]