Maynooth is located on the R148 road between Leixlip and Kilcock, with the M4 motorway bypassing the town. Other roads connect the town to Celbridge, Clane, and Dunboyne. Maynooth is also on the Dublin to Sligo railway line and is served by a commuter and intercity train service.

Maynooth comes from the Irish Maigh Nuadhat or Maigh Nuadhad, meaning "plain of Nuadha". Maigh Nuad is the modern spelling. Nuadha was one of the gods of the ancient Irish, corresponding to Nudd of Wales and Nodens of ancient Britain and Gaul.

Maynooth was a long-term centre for the Geraldine or FitzGerald family, which dominated Irish affairs in during the Anglo-Norman and Tudor periods.

From 1932 to 1937, the town was the unofficial home to the King's representative in Ireland, Governor General Domhnall Ua Buachalla, who declined to take up official residence in the Viceregal Lodge in the Phoenix Park, and whose family operated a hardware store in the town until 2005, the only shop with an Irish language name in the town for many years, though during 2014 a sweet shop named An Siopa Milseán has opened a few doors away. 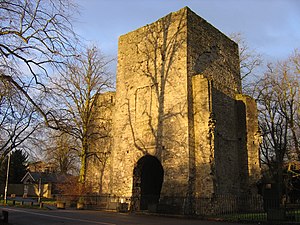 The town has, at either end of the main street, Maynooth Castle and Carton House: two former seats of the Dukes of Leinster. The castle was a stronghold of the 16th-century Thomas FitzGerald, 10th Earl of Kildare who was better known as Silken Thomas. The castle was overrun in 1535, after the rebellion of the Earl.

The village is just inside the western edge of The Pale.

The most important historic buildings in the town are those of St Patrick's College and some of which antedate the foundation of the college, while others are in the late Georgian and neo-Gothic revival style. The "new range" of buildings was erected by A. W. N. Pugin in 1850 under a commission from then college president Laurence F. Renehan, while the College Chapel was designed and completed by James Joseph McCarthy during the presidency of Dr. Robert Browne in 1894.

The famed Conolly's Folly is also near the town, although it is arguably in Celbridge, as it is much closer to it, but is covered by Maynooth's very extensive town boundaries. It was known to be the gateway to the west as the main route from Dublin.

There are three old monastic settlements in the vicinity of Maynooth, including Laraghbryan and its cemetery, Taghadoe and its Round Tower and Grangewilliam (Donaghmore).

The population of 15,905 according to the census in 2016 [4] is the fifth largest in Kildare and the 35th largest in Ireland, however during the academic year the population of Maynooth nearly doubles in size. Measurement can be difficult as much of the population is transient – students at Maynooth University (above 12,000) or St Patrick's College, or temporary employees at the nearby Intel and Hewlett Packard facilities (both located in Leixlip). 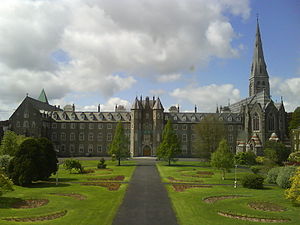 Two tertiary educational institutions – St Patrick's College, founded under King George III in 1795 to train Ireland's Roman Catholic clergy, and Maynooth University, separated from St Patrick's College in 1997 – are located in the town. They share campus space and many facilities. Maynooth University is the only university in the Republic of Ireland not situated in a city. There are two secondary school (Maynooth Post Primary & Maynooth Community College), and four primary schools: a girls' school, a boys' school (St Mary's BNS), an Educate Together school, and an Irish-speaking school.

Kildare Vocational Education Committee has received patronage authority to build a second secondary school, albeit their desire is to split the existing one to senior and junior schools instead.

The town contains a fire station, in addition to the area's part-time Garda station, a health centre, a branch library, and a credit union as well as various restaurants, including Romayo's which was voted to be the best Take-Away in Leinster in 2014.[5]

Maynooth is served by two churches named St Mary's, one St Mary's Church of Ireland (Anglican) which is incorporated into the walls of St Patrick's College, and St Mary's Roman Catholic church where the Kilcock Road, turns into Maynooth Village, serving the Maynooth Parish of St Mary's and Ladychapel. Also close by is the former Moyglare Church which is used as the Church of Ireland, Meath & Kildare Diocesan Centre. Maynooth Community Church is a congregation linked to the Presbyterian Church in Ireland.

The town is the main retail and service centre for North Kildare and South Meath, with branches of SuperValu, Tesco, Aldi and Lidl, as well as a wide variety of non-chain stores. In October 2005, Dunnes Stores opened a major shopping centre off the town's main street, Manor Mills. This centre contains a number of other high street names, such as Easons and Elvery's Sports. On 18 January 2007 Tesco announced plans to demolish its existing store in Maynooth (the same store having been demolished and rebuilt only seven years previously) and build a larger shopping centre, anchored by a Tesco Extra store, on a neighbouring site.[6] The new centre is known as Carton Park, after nearby Carton House. The Tesco Extra portion of the new shopping centre opened on 3 November 2008, with Heatons, Sports Direct, Next Children and Boots. A number of shops that formed part of the former Maynooth Shopping Centre remain open on the old site. 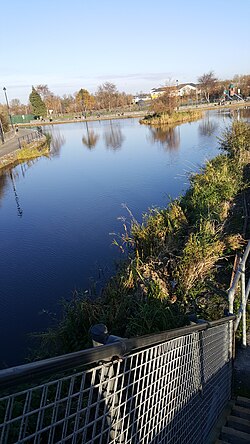 Maynooth Harbour by the Railway Station

Maynooth is on the Royal Canal, navigable from central Dublin to this point, now used mostly for leisure purposes. It provided an important stopping point before Dublin in the period directly before the coming of the railways in the first half of the 19th century. The harbour, known locally as Dukes Harbour is roughly triangular in shape and on the north side of the canal, opposite the railway station is a popular fishing area.

Maynooth railway station is one of the busiest in the Dublin / Kildare region, serving as it does two major educational institutions. The town is the terminus of most Western Commuter trains, as well as being served by the Sligo InterCity service.

Carton House Golf Club is located in Maynooth. The Golfing Union of Ireland, the longest established golf union in the world, have their national headquarters on the estate. This facility also comprises the GUI National Academy, a 22-acre teaching facility for up-and-coming golfers, as well as being a facility available to all golfers in Ireland. It has a driving range, putting green, and short game area, as well as lessons.

North Kildare RFC is the local rugby club and is situated about two miles from Maynooth on the Kilcock road. Maynooth native Bob Casey (born 1978) was a professional rugby player and a senior Irish international.[7]

Maynooth GAA is the local Gaelic Athletic Association club and compete in the senior football championship in Kildare since 2009.

Le Chéile Athletic Club is based in Maynooth.