Wordsley is a village in Staffordshire, in the very south of the county and within the Black Country, south of Kingswinford, and once Wordsley formed part of the extensive manor of Kingswinford. The conurbation ends abruptly at Wordsley's western edge, beyond which are the villages of Lawns Wood and Prestwood. Looking north, south and west however the housing is continuous.

Wordsley stands just north of the River Stour which forms the border with Worcestershire to the south.

A 610-mile long-distance footpath runs nearby, the Monarch's Way. The path loosely follows the escape of King Charles II during the English Civil War. He is said to have stopped at a house (which has since been demolished) on the corner of Kinver Street and the main Stourbridge road in Wordsley, during the night following the battle of Worcester on 3 September 1651, and taken bread and beer for himself and his party of about 60 cavaliers.

There were numerous glassworks in Wordsley from 1776 until 1930, making artisan-created cut-glass items such as vases, glasses and objets-d'art. One of the most famous glass designers was a Wordsley man, William Jabez Muckley. Another was John Northwood, and his son Harry C. Northwood who helped establish glassware in the United States of America.[1] Yet another who established glassware in the USA was John Northwood's friend, Frederick Carder. One of the most accomplished glasscutters was George Woodall, whose campaign led to the building of the Wordsley School of Art. The 'Red House Glassworks', a 100-foot high glassmaking cone, survives and has recently been restored. Lead-crystal cut-glass from Wordsley's heyday is now rare and collectable. Glassworking continued in the area, albeit at a reduced scale, until the 1990s.

Wordsley was the headquarters of the Royal seedsmen, Webbs of Wordsley. Their grounds covered thousands of acres.

A Workhouse was opened at Wordsley in 1903 and became fully operational in 1907, becoming a military hospital during First World War (1914–1918) but became Wordsley Hospital, a civilian hospital, after the end of Second World War in 1945. The buildings had ben extended during its time as a military hospital but it was further expanded afterwards, the final extension being a state-of-the-art maternity unit that opened in 1988. However, the hospital closed in 2005 with its services being moved to an expanded Russells Hall Hospital in Dudley. Most of the buildings were demolished in 2007 to make way for housing, but parts of the hospital were saved for conversion into housing. These include the chapel and the old workhouse buildings. 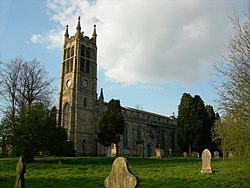 This church is the Holy Trinity Church in Wordsley which was consecrated in 1831, replacing St. Mary. Construction had begun 1828 following the donation of land from the Earl of Dudley. The building was designed by architect Lewis Vulliamy. This replaced the ancient parish church at Kingswinford, which was reopened in 1846, initially as a chapel of ease.

Much of the historic fabric of the village has been subject to demolition over the decades. Victorian terraced housing, shops and glassworker cottages - now so valued elsewhere - were replaced en masse by large housing estates built either in the 1960s modernist style or the 1990s Barratt style. Village buildings that were formerly highly notable fine relics of the Victorian and Edwardian era, such as the Wordsley Hospital and the Wordsley School of Art, have recently been demolished or redeveloped.

Wordsley Hospital closed in 2005, with its functions being transferred to Russells Hall Hospital. Some of the less significant buildings were demolished in 2007, but most of the older buildings are being refurbished and incorporated into the new housing development.

The fine Wordsley School of Art, built in 1899 had fallen into disrepair and was demolished at the end of 2000. The first instructor at the school was Frederick Carder, a glass designer. The building had not been used since the Community Association moved to new premises at The Green in the 1970s. The Broadfield House Glass Museum salvaged two granite plaques which were laid down when the school was completed in 1898 and extended in 1906.[2] The school's site remains empty and overgrown.

In 2006, a row of dilapidated shops at the junction of High Street and Brierley Hill Road were cleared, and plans were announced to widen the often congested road system at this point. New apartments were built on the plot and completed in 2008 (Retrieved 14 July 2007)</ref> There is concern that this, and other major homes schemes in the area, will lead to much increased traffic problems on the High Street.

Stuart's Glass Works, another notable building, came under pressure from sales of cheaper imported glass and the business there closed in March 2002. The Stuart's site is earmarked for residential development, which will incorporate some of the historic buildings such as the old flour mill. The glass making centre has know been knocked down, and waiting for a new housing development.[3] The historic Red House Cone is now preserved as a museum and visitor centre with a craft centre.

Wordsley is noted for having an unusually large number of artistic groups operating in the music, theatre and arts sectors. Wordsley is home to the Dudley Music Centre, a respected local facility for the teaching and performance of music. There are two major theatre groups operating from Wordsley: Wordsley Amateur Dramatics Society, and G.I.S.T. The contemporary poet Gary Bills was born at Wordsley Hospital, and attended Lawnswood Primary School and The Buckpool School, now known as the Wordsley School.

1st Wordsley Scout group was formed in 1910 and was initially based on what is now the A491 road near to the Red House Glass Cone. However, in the 1950s, they moved to their current headquarters on the B4180 Brierley Hill Road on the Wordsley/Brierley Hill border. In 2010, the group celebrated their centenary (just 3 years after The Scout Association's centenary in 2007).

Wordsley is also home to 5th Wordsley Guide on a Thursday night at the Richardson Hall.

Wordsley is also home to a Boys Brigade club, which is held on a Monday night by Jill Fielder & Sylvia Liddell, it takes place at Wordsely Community Centre. There are also Scout and Brownie groups held weekly and dance classes held at Holy Trinity Church Hall. Wordsley takes great pride in its many great parks.