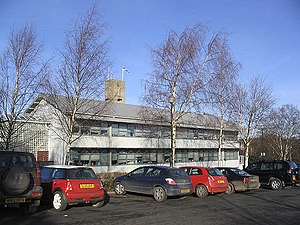 Newtown St Boswells is an old settlement, well-established by the 16th century. The town has been known at various times as Newtoune, Newtown of Eildon, Neuton and Newtown of Dryburgh.

Historically, Newtown St Boswells was a centre for milling grain, with watermills on its burns. It became a regional centre of communication and an exporter of livestock after the opening of its railway station. This importance has declined since the closure of the station in 1969.

A major housing development, which could double the population of the village, has been generally agreed. This will add 900 homes to the village.[1] The scheduled re-opening of the Waverley railway line, which will connect the nearby village of Tweedbank with Edinburgh, may provide opportunities for the village to become a commuter settlement.

Proposals to expand and move the town's livestock auction facilities to the other side of the A68 road were approved in 2007, freeing up space for residential building.[2]