From Wikishire
(Redirected from River Whiteadder)
Jump to: navigation, search 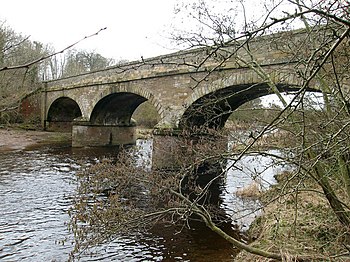 The Whiteadder Water at Todheugh, near Duns 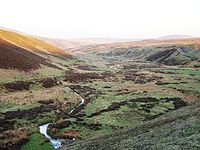 The headwaters of the Whiteadder

Whiteadder Water is a river of Berwickshire, a tributary of the River Tweed. It flows through three counties; its upper waters are in East Lothian, amongst the Lammermuir Hills; it then passes most of its length in Berwickshire, then its lower reach enters the Liberties of Berwick in Northumberland, where it falls into the Tweed.

The Whiteadder rises on the low hillside of Clints Dod at 400 feet above sea level in the Lammermuir Hills, just east of Whitecastle Hillfort and 2 miles south-east of the village of Garvald.

The stream wends its way southeast for approximately 3 miles where it joins with the Faseny Water to form the Whiteadder Reservoir formed in 1968, which supplies most of the towns of East Lothian and Berwickshire, with water (and the Cockenzie power station too).

The waters issuing from the reservoir soon cross into Berwickshire and the river runs alongside the B6355 road to Ellemford, where it is joined by the Dye Water and further on at Abbey St Bathans, the Monynut Water.

By this point having become a much larger body of flow, the Whiteadder meanders across eastern parts of the Merse of Berwickshire, passing the villages of Preston, Chirnside, Allanton.

At Allanton the Whiteadder is joined by the Blackadder Water. The river proceeds by Foulden, Edrington, and Paxton, at which point it crosses into Northumberland, and soon joins the River Tweed, just north of East Ord, a suburb of Berwick-upon-Tweed.

For those with fishing permits, the Whiteadder provides recreational salmon and trout fishing. It is also the site of Ninewells, the childhood home of David Hume.[1]