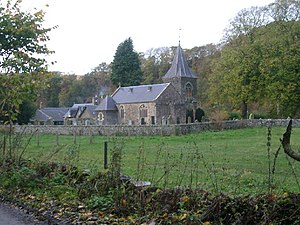 Abbey St Bathans is a village and parish in Berwickshire. Formed as a long winding steep wooded valley, it is unique in its topography.

Although its name suggests a larger foundation, Abbey St Bathans was originally a priory of Cistercian Nuns. It was sanctified and then used as a retreat by the sisters who formed the community at Haddington and at Nunraw, under the patronage of Ada, Countess of Dunbar and her husband Patrick, Earl of Dunbar.

Though the original location of the monastic accommodation is unknown today, there is a stone on one side of the glen known as the Abbey Stone. While there are no religious houses in the village today, there is a small church in the square. A Minister is shared with nearby hamlet of Longformacus. The dedication is to Saint Bathan, the second abbot of Iona.

In the mid-1960s a deposit or "midden" was found by the existing church, on the river bank where such a "tip" would logically be located. This contained many shards of pottery which were identified as mediæval by the Royal Scottish Museum, Edinburgh. This suggests that the monastery was located in the riverside meadow area around the existing church, and a dig would probably reveal some of the structure. This deposit was discovered and excavated by Mrs. E. K. Robb, whose family used to holiday in the farm.

The majority of the surrounding land is owned by various members of the Dobie family—the oldest brother being the Laird of the demesne. Some of the woodland has been used by the Forestry Commission at various times, but now this is not the case.

The village proper is based around 'The Square', where the church, a telephone and some houses are located. Abbey St Bathans is situated beside the Whiteadder Water. The Southern Upland Way and the Sir Walter Scott Way pass through the village. The SYHA used to have a youth hostel in the village to support walkers, however it has been closed a for number of years.[1]

Another local attraction is The Riverside, a small restaurant further down river. It is located next to a fish farm. The village hall also hosts a small number of events each year. For community events information please see the community council website under Outside links below.

Nearby are the remains of the historic, Edin's Hall Broch, an Iron-Age defensive structure.

Further up the valley from the Church and 'The Square' can be found the old village hall which still holds regular events and occasional exhibitions.

The house began, probably in the early 19th century (a datestone of 1694 is of unknown provenance) as a thatched cottage ornée, set at the base of a knoll with the ground falling away steeply to the north to the Whiteadder Water. It was built for the Turnbull family. This earlier core is identifiable at the centre of the entrance front as a two-bay section with first-floor dormers rising through the eaves, and with a salient gabled section at its northern end terminating the north-west range.

Later extensions, especially in the 1870s, retain something of the original character, if not the scale, in the plethora of traceried bargeboards, dormers, and barley-sugar chimneystacks. The detailing of the north-west front is more overtly Baronial, having a central tower-like pavilion with chamfered corners at the upper levels, a tall pyramidal roof, and a quadrant bartizan at the north-east angle. There are attractive interiors, particularly the stair with twisted balusters and timber arcading. Many fittings were moved here in the 1880s by Dorothea Veitch from Bassendean House.

On the estate are a picturesque lodge, stables and groom’s cottage, and an artfully composed Z-plan complex including gamekeeper’s cottage and kennels.

In 2006 the house was in multiple occupation.