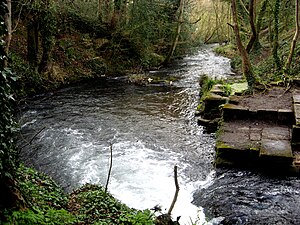 The Frome rises from several springs at Nettleton, about a mile south-east of Birdlip and in springs at Climperwell Farm (south-west of Brimsfield). The two branches join together in Miserden Park just south of Caudle Green.

The river is recognised as the "Frome" at Caudle Green (north of Miserden).

At Caudle Green the eastern side of the valley rises to the gentle hills which form part of the watershed between the North Sea and Atlantic Ocean, which watershed is approximately one mile to the east of the river. Thames Head, the source of the River Thames, is just over the summit from the Frome; the Frome flowing west and the Thames east basin shares a length of this hillside feeding into the River Thames to the east.

The Frome continues to meander its way south to Sapperton, then west towards Stroud. The river flows through Stroud continuing north-west through Ebley and Stonehouse where it goes under the M5 motorway, then on to Saul where it enters the River Severn at Upper Framilode.[2] 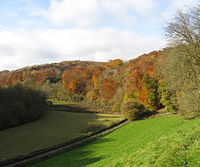 The Golden Valley in Autumn

From Sapperton the River Frome runs adjacent to the Stroudwater Canal which is now disused, although undergoing repairs. The Stroudwater Canal, fed by the Frome, was an important and essential part of Stroud's growth as a town. The canal was a thriving thoroughfare for trade, putting Stroud on the map, during the industrial revolution.[1]

At Stonehouse the River was part of a novel, ill-fated, scheme by John Kemmett, around 1760, to create a canal without locks.

The valley from Chalford to Stroud, known as the Golden Valley, is one of the five Stroud Valleys. Through this valley run the railway line and the Thames and Severn Canal, both to the Sapperton Tunnels under the Cotswolds.

There are several nature reserves in the Sapperton Valley by the River Frome and the canal.