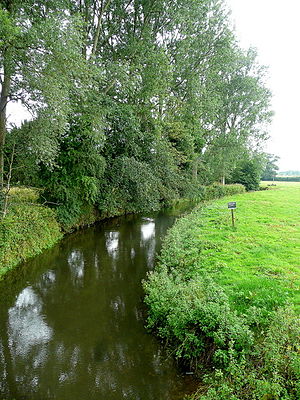 The River Enborne at Shalford Bridge

The River Enborne is a river of Berkshire and which for a while marks the border of that county with Hampshire.

The Enborne rises close to the meeting of Berkshire, Hampshire and Wiltshire, near the villages of Inkpen and West Woodhay and ultimately it becomes a tributary of the River Kennet. The river is formed by a series of little brooks rising from wells on the chalk hills either side of the Berkshire and Hampshire border, and from early on the infant Enborne begins to form the border between Berkshire and Hampshire. The river gives a name to a village near its course, Enborne, albeit that the river does not reach that village itself, only its hamlet, Enborne Row.

From its source near the villages of Inkpen and Woodhay, the Enborne flows eastwards. At Smith's Bridge, near Holtwood the river begins to form the boundary between Berkshire and Hampshire, which duty it performs for most of its course, swelling as it goes.

Eastwards, the river is crossed by the A34 (Newbury bypass) at Enborne Row. Near here, to the south, are two woodlands managed by the National Trust: "The Chase" and "Great Pen Wood".

Further downstream the river passes to the south of Greenham Common, and here, near Headley, the river is joined by a tributary from the South, from Ecchinswell and Watership Down Hill.

The river leaves off marking the county border at Hyde End near Crookham, and from here the Enborne turns northwards into the body of Berkshire. Past Brimpton it enters the meadows around the River Kennet and meanders through these eastwards across open farmland and Brimpton Common, to join the main stream of the River Kennet near Aldermaston Wharf.

The river in fiction

The river plays a significant part in Richard Adams' novel, Watership Down. Early in the book, the rabbits from Sandleford are threatened by a dog. Blackberry realises that they can float across on a wooden board, and thus they make their escape.[1]