Inkpen is a village in the far south-west of Berkshire, about 3½ miles south-east of Hungerford, and close to the borders of both Wiltshire and Hampshire. 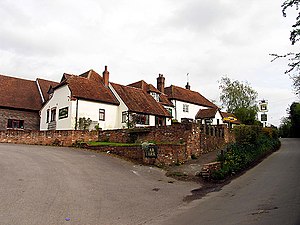 Near the centre of the village just off Post Office Road is a large field of Mediterranean crocuses, one of only two in Britain. According to the information plaque, the plants are believed to have been brought here by the Knights Templar in the Middle Ages for the production of saffron. It is currently owned by the Berkshire, Buckinghamshire and Oxfordshire Wildlife Trust.

Inkpen has two public houses, the Crown & Garter[2] and the Swan Inn.[3] Both are hotels and have restaurants, and the Swan Inn also has an organic food shop.[4] The village has also a monthly farmers' market.[5]

There is a village hall. Inkpen County Primary School has about sixty pupils.

The highest points of Berkshire and Hampshire are found on Walbury Hill just a mile and a half south of the village. At its summit, 974 feet above sea-level, is Walbury Camp Iron Age hill fort, the start of both the Test Way and the Wayfarers Walk. Immediately south of the village is Inkpen Hill, continuing the same hill ridge westwards, with Gallows Down between the two.

On Gallows Down is Combe Gibbet, a reproduction of a notorious gibbet raised here, and the Inkpen Long Barrow. Up on the Down, skylarks may often be heard and hang gliders and paragliders seen circling above the landscape. 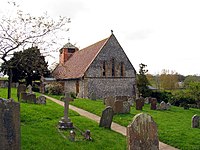 The Church of England parish church of St Michael is 13th century.[6][7] The east window of the chancel and west window of the nave were added in the 15th century.[6] The church was restored by Clapton Crabb Rolfe in 1896; he added the south porch, south window and north aisle[8] The church's new reredos, altar tables, Rood and rood screen, pulpit, lectern and much new seating were carved for Rolfe by Harry Hems of Exeter.[9]

Archaeology of the parish

There were people living on the Downs of Inkpen some 5,000 years ago. Intact pots by the Beaker People have been unearthed at the Hungerford end of Craven Road in Inkpen, opposite Colnbrook Copse, as well as on the Downs. Early Beaker flint tools have also been found close to the old saw mills at the end of Folly Road, along with evidence that suggests they were manufactured nearby. The pottery finds at Craven Road were found in a layer of sand close to where an ancient brook known as the Ingeflod would have run. At the bottom of the hill on the Hungerford Road leaving Inkpen, flooding in wet weather, still sometimes re-enacts the meanderings of this river through the fields to the northeast. It seems likely that this fresh water attracted the beaker people to settle and live in their round houses there, using the fertile soil for crops and livestock grazing. Evidence of an ancient field system is certainly still visible not far from the Inkpen Long Barrow.

The West Berkshire Museum has a number of bone tools and a bronze knife found in Inkpen that date from this period. In 1908 trenches dug at Sadler's Farm, the site of a ploughed-out barrow, revealed a large quantity of animal and some human bones, horns and some early or pre-Romano-British potsherds. The beaker people buried their dead in simple stone mounds since called round barrows, often with a beaker alongside the body. Several of these remain on the hilltop to the west of the Gibbet. Four were explored in 1908 when Neolithic tools and small urns with burnt human bones, suggesting cremation, were found. Later, in the Bronze Age, communal long barrows were used, like the one under Combe Gibbet. 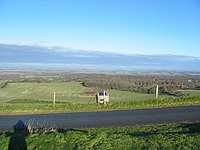 The massive Iron Age hill fort, Walbury Camp, crowns Walbury Hill south of the village. It was built in around 600 BC and remained in use until about the time the Romans invaded Britain. The construction of its massive banks and ditches, encircling some 80 acres, would have been an enormous feat. It would have been defended by a timber fence or palisade and populated with round houses and maybe pens for livestock. Walbury Camp was built, not only for the protection of the locals from attack by warring groups, but also in response to the increasing importance of the hilltop tracks for trade and the movement of livestock.

There is little evidence of Roman activity in Inkpen. Some of the hill trail trade was diverted down to the Ermin Way. In 1984 archaeological finds were discovered near Lower Green suggesting the presence of a Roman or Romano-British dwelling of some kind, possibly not unlike the Roman villas found at nearby Kintbury and Littlecote. During building work near Combe in 2003, a Roman burial was also found.

At the foot of the Inkpen Beacon is what some believe to be the eastern end of the Wansdyke, a long ditch and bank (or linear defensive earthwork) built at some time between 400 and 700. Current theory suggests a date around AD 470 when some hill forts were also being refortified by the Romano-Britons. It runs east-west between Inkpen Beacon and Portishead near Bristol. Although its eastern end is generally thought to be just south of Marlborough, amongst which hills the line is very clear. There is a small section is named "Wansdyke" on Inkpen's enclosure award map of 1733. Its construction clearly points to danger from the north, perhaps from the first Saxons of what is now Berkshire, who settled around Abingdon.

History of the village

The earliest record of Inkpen is in the Cotton Charter viii, dated between 931 and 939. This includes the will of a Saxon thegn named Wulfgar. Wulfgar owned "land at inche penne" which he "had from Wulfric, who had it from Wulfhere who first owned it", his father and grandfather respectively. Wulfgar left this to be divided amongst named heirs: three quarters to his wife, Æffe, the other quarter to "the servants of God" at the holy place in Kintbury. Following Æffe's death, her share was also to go to the holy place at Kintbury "for the souls of Wulfgar, Wulfric and Wulfrere".[6]

Below is a selection of subsequent spellings of a dictated Inkpen over a period of some three hundred years by various scribes: