Brimpton is a pretty, rural village in Berkshire, a place of some 600 souls. The village is to be found between the River Kennet and the River Enborne, and is near the Hampshire county boundary.

The oriin of the village's name is uncertain. One suggestion has it that it is 'Brynni's Town' after a supposed Anglo-Saxon owner.[1] A more likely explanation is that Brimpton stands on a hill, and the name comes from an Old English borrowing of an Old Welsh word for "hill" (the Modern Welsh bryn) and hence "Hill town".[1]

Brimpton has also been recorded as Brinniggetun and Bryningtune (in the 10th century) and Brintone (Domesday Book). More recent alternative names include Brinton, Brimton, Brumton and Brumpton.[2]

There have been at least three churches in Brimpton, two of which are still in use. The Church of England parish church is dedicated to St Peter, and is a Grade II listed building. It was built in 1869 in designed in the 14th-century style.[3] It is a flint-built building with a tower topped by an octagonal shingled spire) and a wooden porch. The roof is tiled.[3] The structural columns are granite.[3] 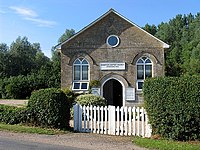 The chapel of St Leonard, a 14th-century stone building,[1] is located on Manor Farm.[4] It was used as the place of worship of the Shalford Preceptory, a group of Knights Templar (and later Knights Hospitaller) who had formed in the 13th century. By 1614, the chapel had been converted into a barn at Brimpton Court.[1]

Five Bronze Age round barrows aere to be found at the southern boundary of the parish adjoining Baughurst,[1] known as "Borson Barrows"; the tumuli were referred to in an Anglo-Saxon charter in AD 944.[1] There have also been Iron Age and Roman period settlements identified within the parish. The hypocaust of a villa was once uncovered in the village, though records of its exact location no longer exist. One possible location is opposite Brimpton House near the parish church.[1]

In the 10th century, 10 hides of land in Brimpton were given to Ordwulf), a thegn of Edmund I.[1] The Domesday Book of 1086 lists the village as "Brintone", and identifies Robert FitzGerald and Ralph de Mortimer as the lords of the manors of Shalford and Brimpton respectively.[5][6] It also mentions two churches, three mills, and a dairy.[5]

Brimpton was visited by William Cobbett on 30 October 1822 on his way to London; he noted its name as "Brimton", but did not write further about the village.[7] John Marius Wilson's Imperial Gazetteer of England and Wales (1870–1872) described Brimpton as measurng 1,692 acres with property to the value of £3,720. The population was 452, divided amongst 101 residential buildings. Wilson wrote that a preceptory of the Knights Templar (Shalford Preceptory) was established in Brimpton in the 13th century.[8]

Brimpton Manor was owned at the time of the Norman Conquest by King Harold and granted by the Conqueror to Ralph de Mortimer, to whose family it descended. Edmund Mortimer, 5th Earl of March died childless in the 1420s and the manor was inherited by Richard, Duke of York. After his death in 1460, the manor was owned by his wife Cecily Neville, until its ownership was reverted to the crown on her death.[6]

Shalford manor was owned after the Conquest by Robert FitzGerald. It had previously been under the ownership of Brictric, a thegn to Edward the Confessor.[6] A later tenant, Simon de Ovile, granted use of the 3½-hide estate to the Knights Hospitaller. Letters Patent dated 29 November 1302 show that the Knights played host to King Edward I at Shalford.[6] The Knights held the manor until their dissolution in 1540 and after this, the manor was owned by the crown.[6] In 1544, Henry VIII exchanged the manor with William Wollascott for the manor of Dalehall in Lawford, Essex.[6] Wollascott's son, also named William, purchased the manor of Brimpton also in 1595.

The village is not large. It has its two churches, a village shop called 'Forge Stores' which is now a charity shop, the Three Horsehoes public house, and a school. There is also a village hall that is used by local organisations.

Brimpton Airfield is located a mile east of the village, a quiet 500-yard grass runway where a few light aircraft are based.