Not to be confused with River Clun, Glamorgan 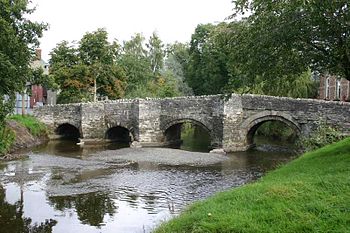 The Clun flowing through Clun village

The River Clun is a river mostly in Shropshire which runs through the small town of Clun, as well as through or near a number of other villages situated along its valley. It discharges into the River Teme at Leintwardine, Herefordshire. The Clun Valley is very rural and is part of the Shropshire Hills Area of Outstanding Natural Beauty.

The source of the River Clun is near the hamlet of Anchor (in the marshy area by the public house there), very close to the bounds of Montgomeryshire and Radnorshire. It then flows east until the Aston on Clun area, without dampening the village itself, where it then flows roughly in a southern direction. The Clun flows around the north end of Clunbury Hill. After this change in direction it enters the lower valley where the valley widens into an extensive flood plain.

The river flows into Herefordshire after passing Broadward where it enters a 'Site of Special Scientific Interest' for a stretch south of Broadward Bridge, and soon its waters enter the River Teme.

The river gives its name to many places in the area, including Clun itself and the villages of Newcastle-on-Clun, Clunton, Clunbury, Aston on Clun, and Clungunford (in order heading downstream).

In Clun the historic Clun Bridge still takes the A488 road over the river. A number of other historic bridges and fords cross over the river, including Broadward Bridge.