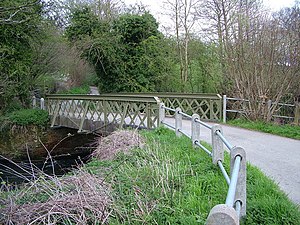 Jay is a hamlet in Shropshire that forms part of the parish of Leintwardine otherwise in neighbouring Herefordshire.

It lies to the west of the River Clun, a mile north-west of that Leintwardine. The lane between Jay and Leintwardine is called Jay Lane and the bridge over the Clun is Jay Bridge. The minor River Redlake passes Jay and then joins the Clun just south of Jay Bridge.[1]

The hamlets of Jay and nearby Heath form a single township in Shropshire, whereas the rest of the parish lies in Herefordshire.

A Roman auxiliary cavalry fort was situated at Jay Lane.[2]

Its name, and that of the nearby hamlet of Beckjay (about a mile and a half north), is probably a reference to the family of Elias de Jay, who held the local manor of Bedston until 1349.[3] A relative of this family, Brian de Jay, was the last recorded master of the English Knights Templar.

This Shropshire article is a stub: help to improve Wikishire by building it up.
Retrieved from "https://wikishire.co.uk/w/index.php?title=Jay&oldid=52551"
Categories: