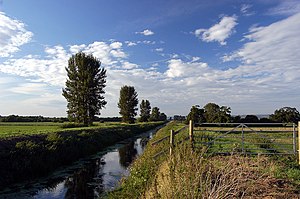 The River Brue near Glastonbury

The River Brue is a river of Somerset, largely passing through the Somerset Levels. It rises in the parish of Brewham, and reaches the sea some 30 miles west, at Burnham-on-Sea. It originally took a different route from Glastonbury to the sea, but was diverted by the monastery in the twelfth century.

The River Brue originates in the same hills as King Alfred's Tower and the sources of the River Wylye and the Dorset Stour.[1] It falls quickly in a narrow valley to a point just beyond Bruton where it is joined by the River Pitt. Here it takes a meandering route through a broad, flat-bottomed valley between Castle Cary and Alhampton.

By the time the river reaches Baltonsborough it is only some 30 feet above sea level and the surrounding countryside is drained into it by way of numerous rhynes.

The river passes Glastonbury, where it acts as a natural boundary with nearby village of Street, before flowing in a largely artificial channel across the Somerset Levels and into the River Parrett at Burnham-on-Sea.

The Brue is joined by the North Drain, White's River (which takes the water of the River Sheppey, Cripps River (an artificial channel that connects it to the River Huntspill) and many drainage rhynes. It is tidal below the sluices at New Clyce Bridge in Highbridge.

Bow Bridge is a 15th-century Packhorse bridge over the River Brue in Plox, Bruton. It has been designated as a Grade I listed building,[2] and Scheduled Ancient Monument. The bridge may have been built as a link between the former Bruton Abbey, and its Court House in the High Street.[2] The bridge was restored after floods in 1982. 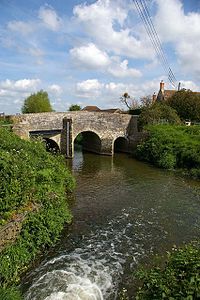 The Pomparles Bridge is a mediæval brifdge over the Brue, which has attracted a local legend. Once the river below the bridge, below Glastonbury, would have formed a broad lake, and this has been put forward as a location for the home of the Lady of the Lake of Arthurian legend. Pomparles Bridge, at the western end of this lake, guarding Glastonbury from the south, has been imagined back into the past as the spot frm which Sir Bedivere threw Excalibur into the waters after King Arthur fell in battle.[3]

John Leland noted in the 16th century that the bridge had four arches, while Phelps in an 1839 illustration as having only two arches, one pointed, probably C14-15, and the other round. Excavations in 1912 found the remains of a second round arch regarded as C12 work. The current concrete arch bridge was built in 1911 and extended in 1972. It carries the A39 road over the Brue.

The River Brue has a long history of flooding. Its lower reaches are close to sea-level, and the river above Bruton drains an area of 7,660 acres into a steep and narrow valley. In 1768 the river rose very rapidly and destroyed a stone bridge in Bruton. In 1984 a protective dam was built half a mile upstream from the town.[4][5]

The Brue Valley Living Landscape is a conservation project based on the Somerset Levels and Moors and managed by the Somerset Wildlife Trust. The project commenced in January 2009 and aims to restore, recreate and reconnect habitat. It aims to ensure that wildlife is enhanced and capable of sustaining itself in the face of climate change[6] while guaranteeing farmers and other landowners can continue to use their land profitably. It is one of an increasing number of landscape scale conservation projects in the UK.[7][8][9]

The course of the river once partially encircled Glastonbury from the south, around the western side (through Beckery),[10] and then north through the Panborough-Bleadney gap in the Wedmore-Wookey Hills, to join the River Axe just north of Bleadney. This route made it difficult for the officials of Glastonbury Abbey to transport produce from their outlying estates to the Abbey, and when the valley of the river Axe was in flood it backed up to flood Glastonbury itself. Therefore, at some time between 1230 and 1250, a new channel was constructed westwards into Meare Pool north of Meare, and further westwards to Mark Moor. It then divided into two channels, one the Pilrow cut flowing north through Mark to join the Axe near Edingworth, and the other directly west to the sea at Highbridge.[11]

Between 1774 and 1797 a series of enclosures took place in the Brue valley between the Polden Hills and Wedmore.[11] In 1794 the annual floods filled the whole of the Brue valley. Work by the Commissioners of Sewers led to the 1801 Brue Drainage Act which enabled sections at Highbridge and Cripp's Bridge to be straightened, and new feeder channels such as the North and South Drains to be constructed.[12] In 1803 the clyse at Highbridge, which had been built before 1485, was replaced and moved further downstream.[11]

The mouth of the River Brue had an extensive harbour in Roman and Saxon times, before silting up in the Middle Ages. It was used again as a small harbour in the 17th and 18th centuries, and in 1833 the port of Highbridge was formally opened on the river. A new wharf, known as Clyce Wharf, was built on the Huntspill side of the river mouth by 1904, and was used for the import of coal and the export of bricks and tiles and agricultural products. The port closed in 1949.[13]

Both Galton's Canal and Brown's Canal once connected to the river.[14] The Glastonbury Canal used the course of the River Brue from Highbridge to Cripp's Bridge, and part of the South Drain to Ashcott Corner.[12]

Anglers will find pike in excess of 20 lb, with good stocks of chub, dace, roach, bream, tench, perch, rudd, and gudgeon. There are trout in the upper reaches.[15]

There are several access points along the river suitable for canoeing, and the river has been paddled as far up as Bruton, but above West Lydford only after recent rain.[16] There are public footpaths alongside many stretches of the river.