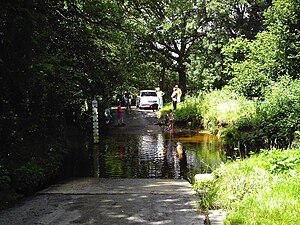 The ford at Lovelands Lane 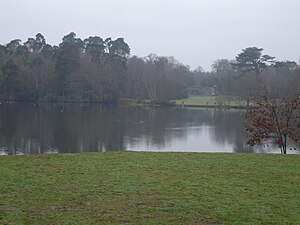 Virginia Water Lake near the source of the Chertsey Bourne

The River Bourne is a Surrey river, a tributary of the River Thames. It rises in two branches both indifferentiatedly named the "Bourne". One flows through Addlestone, and the other Chertsey.

The two branches meet outside Weybridge and the united River Bourne flows down to join the River Thames at Hamm Court, Weybridge.

One branch of the Bourne rises at West End near Chobham in a series of springs in the heathland, which is a military training area which includes such areas as Strawberry Hill, Strawberry Bottom, Colony Bog, Lovelands Hill and Brock Hill. The River Hale from Bisley joins the Bourne early on its course.

The Bourne flows through Addlestone to St George's College in Weybridge where it joins the Chertsey branch.

During 12/14 August 2006, the Chobham area suffered from severe floods due to the River Bourne bursting its banks. The floods were caused by heavy rainfall and thunderstorms across the region that resulted in flooded homes and businesses, power cuts and road closures. This caused the rainfall to run across the land to local watercourses and low-lying areas. Two months' rainfall fell in one night and local watercourses were unable to cope with the run off so flooded adjacent land, buildings and roads.[1]

There is concern from some people that the flooding in Chobham, was exacerbated on a small scale by the use of Field 0081, Pennypot Lane, Chobham as a site for travellers who have covered that area with hardcore to support their mobile homes. This area used to be a water meadow absorbing some floodwater from the River Bourne which is adjacent to the site.[2] Planning permission for the site was refused as this land was seen as providing a river corridor for the River Bourne.[3] 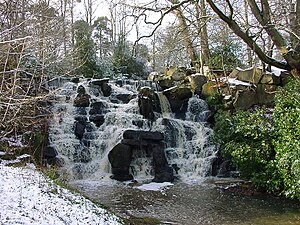 The Bourne's Chertsey branch rises in Windsor Great Park in Berkshire and flows down through Wentworth, Surrey, Thorpe and Chertsey and down to meet the Addlestone branch outside Weybridge.

It is a small river, about ten feet broad and it flows over land which is geologically part of the London clay formation, where clays, sands and gravel overlie chalk. Soils are generally alluvium and the area is low lying.

The river is fished. The chub can reach 4 lb, with barbel reported to touch 6 lb. It is reported to have bream to 2 lb or even carp to 10 lb, along with roach, dace, perch, and pike.[4]

From the source in Windsor Great Park, the Bourne flows into Virginia Water Lake, exiting it at the eastern end by a cascading waterfall. This landform is man-made. The river then flows past the edge of Wentworth Golf Course before it passes through a narrow corridor on its way to St Ann's Hill, Chertsey. During this passage, the northern bank of the River Bourne receives more sun than the south. This affects the microclimate as there are occasional frost pocket and area of high humidity which impacts on the vegetation.

The bridge nearest the source is an old girder bridge. It is a curiosity and its origin is obscure. Old maps show the valley as wet pastureland, probably suitable for cattle, so a strong bridge would have been necessary.

Near the second bridge downstream from the source, there is a colony of mandarin ducks. They were introduced to the River Bourne in 1929–30 and may be the largest mandarin duck colony in the United Kingdom.

In January 2003, the Bourne burst its banks in Chertsey. Approximately 130 properties were flooded and public buildings, including St Anne's County Primary School, were cut off by floodwater.[5] There was local concern that this flood was exacerbated by the building of the Jubilee River which was a flood alleviation scheme at Maidenhead.

The stretch of water running through Chertsey Meads is particularly full of fish when the River Thames is in flood because the fish swim up the River Bourne to escape the turbulence.