Kirkinner is a village in the Machars of Wigtownshire, about 3 miles southwest of Wigtown. The parish of Kirkinner is bounded on the east by the bay of Wigtown, along which the parish extends for about three miles, and on the north by the River Bladnoch. 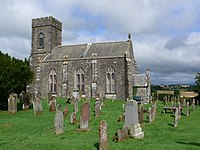 There is a "Hill fort, Ring Hill", North Balfern, near Orchardtown Bay.[1][2]

Doon Hill fort, Capenoch Croft, west of Barnbarroch, occupies a rocky knoll from which the ground falls away steeply to the E. Around the rim of the knoll there is the remains of a substantial stone wall, enclosing an area some 110 feet NE-SW by 100 feet transversely. The entrance, 13 feet wide, is in the SW. There is a ditch around the base of the knoll, except on the E, where there are steep slopes. It has been cut through living rock to the E of the entrance, and there are traces of a counterscarp bank on the NW.

On 21 Dec 1560 there was a Crown Confirmation of Feu Charter of 21 Dec 1560 by James Doddis prior, Allan Peter, Rolland Tailzeor, John Gibson and Thomas Wryt friars predicatores of the Convent of Wigton with consent of the chapter & of (Brother) John Greirsoun, Provincial of the Order, in augmentation of the Rental etc. & for £1000 Scots, in favour of (Sir) Alexander Stewart of Garroleis (Garlies) elder, & (Dame) Katharine Stewart spouses, conjunctly for their lives and Robert Stewart their son and his lawful heirs male whom failing William Stewart (of Castle Stewart, Penninghame, Wigtownshire ?) brother to the said Robert whom failing Anthony Stewart also their brother, of the following lands and annual rents, ecclesiastical & secular.[3]

In 1669 the Rev. Andrew Symson, the kirk minister and the personal friend of David Dunbar, was called upon at the funeral service of Janet Dunbar (née Dalrymple) at Kirkinner, and in the morning he wrote a poem which may have been read at the funeral. Jane Dunbar's strange death on the night of her marriage forms the basis of the plot of Walter Scott's The Bride of Lammermoor (and Gaetano Donizetti's opera Lucia di Lammermoor).[4]

Just off Kirkinner's main street (A746 Whithorn road) stands the parish church of St Kennera (also Cinnera or Cannera). The 19th century church stands on the site of a 13th-14th century foundation and perhaps an even earlier monastic cell where lived the 4th century hermitess, Saint Kennera. Inside the church stands a 4 foot high cross-slab dating from the 10th century AD. On the stone is carved a Celtic style disc-headed cross. The stone slab had apparently stood at the western side of the church for some time before being brought into the church for safety. 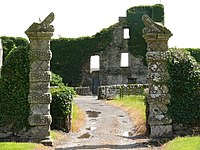 Castelcruick was located at or near Crook of Baldoon, at the end of Shell Road on the opposite side of Lane Burn to Baldoon Castle. Crook of Baldoon has been referred to simply as Crook (1851 census), Cruick (1841 census), Cruik, Creoch, Creochs, Crioch, and Friar's Cruik. According to Around the Parish of Kirkinner, it was part of the Baldoon estate in the 19th century.

The flat carse lands by Bladnoch River were home to a Royal Air Force field of the Second World War. Lane Burn seems to have been diverted for the Baldoon Airfield, based on comparison of the 1895 and current OS maps.

Kirkinner railway station was located on the Newton Stewart to Whithorn branchline. The station opened on the 2 August 1875, closed to passengers on 25 September 1950 and to freight on 5 October 1964.