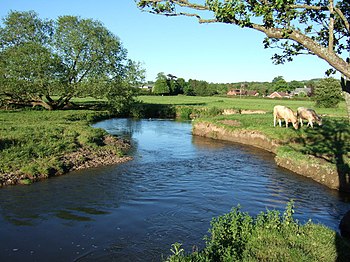 The River Axe near Axminster

The River Axe is a river in Dorset, Somerset and Devon. It rises near Beaminster in Dorset, flows west then south by Axminster and joins the English Channel in Lyme Bay, at Axmouth. On its 22-mile course it is fed by various streams and by the tributary rivers Yarty and Coly.

The Axe is not navigable for any of its course, being too shallow, though its mouth at Axmouth has some boating activity.

The Axe rises near Chedington in Dorset near the Somerset border, very close to the source of the River Parrett, which flows north to the Bristol Channel. From its source the Axe flows west through Mosterton to Seaborough, and begins to flirt with the Dorset – Somerset border, forming the county boundary for several miles, through Chard Junction, where it turns south-west, then, after cutting across Dorset's western salient it enters Devon near Axminster, to which the river lends a name. Soon after Axminster it swallows the River Yarty, and wanders south-west and south between floodplain and meadows, becoming tidal when passing under the A3052 at Colyford, soon after which it swallows the waters of the River Coly.

The river opens into a long tidal estuary between Axmouth and Seaton, and though Axmouth sits on the shore of the estuary, it is a mile inland of the open sea at the river's lonely mouth; only the eastern edge of Seaton and its wharves greet the river's conclusion.

The river gives its name to Axminster and Axmouth, both in Devon.

Fish include brown trout, dace, roach and occasional salmon. An area from the confluence with the Blackwater River (ST325023) to Colyford Bridge (SY259927) is reckoned to have both biological and geological interest. The salmon, bullheads, otters, medicinal leeches and kingfishers are all of particular value, as is the diverse aquatic and marginal plant life. The geomorphology of the meanders south of Axminster are the particular geological interest.[1] 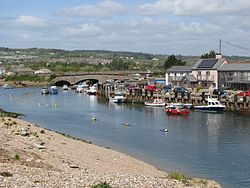 The Axe at Seaton