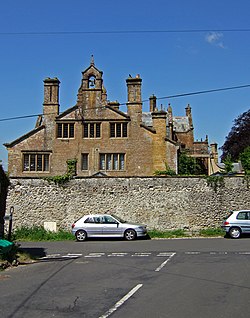 Chedington is a small village and parish in western Dorset, situated near the A356 road four miles south-east of Crewkerne in Somerset.

Chedington is the starting point of the 47-mile-long River Parrett Trail, a long-distance footpath along the route of the River Parrett, which rises in the village.

As John Marius Wilson put it in the Imperial Gazetteer of England & Wales 1870-2, most of Chedington’s eminences command superb views, with Somerset’s Mendip Hills and Hamdon Hills, from which much of Chedington itself is hewn, to the North-East.[2][3]

"Tucked into the deep hills of western Dorset, just off the major tourist routes across England, Chedington is so small that its handful of cottages doesn't even appear on some large-scale maps. Here, far from crowds that haunt Blenheim Palace, Stonehenge, Stratford-upon-Avon, or Haworth, I find the England of my dreams--quiet, pastoral, and sometimes endearingly eccentric...."

The name of the village is Old English for ‘the farm of a man named Cedd’, but it was not included in the Domesday Book, being first mentioned over 100 years later in 1194. It grew up around Chedington Court, although it was the neighbouring village of South Perrott that provided the tradesmen needed to service the estate. Chedington Court itself was completely rebuilt in 1840 by the then owner William Trevelyan Cox, as a flamboyant, Jacobean-style mansion where curvaceous gables feature prominently. Across the narrow thoroughfare, directly opposite to Chedington Court, is Manor Farm. The porch of this dressed-stone building bears the inscription "Thomas Waren 1634", but the core of the building is 16th century.

Chedington church, formerly dedicated to St James, was made redundant in 1980 and has since been converted into a private dwelling.[4] Built in 1841 on a site just to the south of the original church to a design by Taunton Architect, Richard Carver,[5] and originally consisting solely of nave and chancel, the church has Ham stone ashlar walls, a chamfered plinth, a slate roof with stone gable-copings and a scallop-shell motif above the doorway. The bell-cote housed a single bell, said to date from 1610. Later, George Vialls was commissioned to add an organ chamber, a baptistery and the south porch. The building was in service for less than 140 years before it was deconsecrated, its bell dismounted and its internal fixtures removed.

At the north end of the village is Winyards Gap, marking the western end of the Dorset Downs. Winyards Gap was immortalised by Thomas Hardy in his poem A Trampwoman's Tragedy. After the First World War, the National Trust, which owns Wynyard’s Gap, donated 16 acres of land here for a memorial to the 43rd (Wessex) Division of the Dorsetshire Regiment and a replica of the monument found on Hill 112 at Caen in Normandy was erected.

This Dorset article is a stub: help to improve Wikishire by building it up.
Retrieved from "https://wikishire.co.uk/w/index.php?title=Chedington&oldid=44698"
Categories: