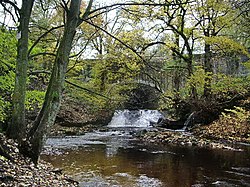 River Ryburn With Slitheroe Bridge hidden in the trees, this bridge carries the A672 over the river.

The River Ryburn is a river in the West Riding of Yorkshire. It flows through the villages of Rishworth, Ripponden and Triangle before flowing into the River Calder at Sowerby Bridge.

The river becomes known as Ryburn at the confluence of a small unnamed stream and Black Castle Clough to the east of Blackstone Edge Reservoir. It flows east parallel to the A58 Rochdale Road into Baitings reservoir. It emerges from the east end of the reservoir for a short time before flowing into Ryburn Reservoir. The river flows out of the east end of the reservoir just to the north of the village of Rishworth, before turning north east and flowing through Ripponden. After leaving the town, it flows north to Triangle before turning north east again, flowing through Sowerby Bridge and joining the River Calder.

The bridge on the B6113, Elland Road, in Ripponden was once part of the Elland Turnpike in 1815. It was originally built in 1772 and widened and altered in the nineteenth century. Next to this bridge is the original Ripponden Old Bridge which has been around since at least 1313.[1]

Local landowner John Rawson (1813-1899) was responsible for the planting of much of the woodland along the River Ryburn valley.[1]