Barkisland is a village in the West Riding of Yorkshire. It is a mile east of Ripponden, two miles south of Sowerby Bridge and four miles south-west of Halifax town centre. Barkisland has one school, a church, a post office and a local cricket club which play in the Huddersfield League.[1] There are two pubs in Barkisland, the Fleece and the Griffin.

A ten-thousand-year-old axe has been discovered near Ringstone Reservoir, providing evidence of human activity in the area now known as Barkisland dating back to the Stone Age.[2] The origin of the name is in dispute. In a book of place names printed in 1944 it was stated that Barkisland derived from it being a settlement ('land') of a chieftain called 'Barkis'. While much earlier, in 1789, the Rev. John Watson, vicar of Ripponden church between 1754 and 1769, theorised that "Barsey or Barkesey are Anglo-Saxon words meaning low-lying enclosures where birches grow. It also is the Anglo-Saxon for a district where there are wolves."[3]

Barkisland originates as a township of the ancient parish of Halifax. A civil parish existed from 1866 to 1937, when it was merged with that of Ripponden.

Bower's Mill was built in the 18th century as a water-powered fulling mill.[4] it has also been used as a corn mill, a worsted mill and a woolen mill. Textiles manufacturer J. & S. Taylor Ltd occupied the mill from 1882 to 1991 before moving production to Sowerby Bridge.[5] The mill has now been converted for smaller businesses.[4]

Barkisland Mills is a 6-storey building which was used for textile production in the 19th and 20th centuries. At the start of the 21st century it was converted into residential flats.[4] There was also a Bottomley's Mill in Barkisland. Its presence as a cotton mill was recorded when a fire broke out there on 13 January 1871.[4]

Barkisland is situated on a hilltop that gently rises from Greetland in the north-east and declines westwards to Ripponden and eastwards to Stainland. The hill continues to climb southwards towards Scammonden. 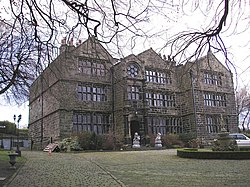 A surviving historic landmark of Barkisland are the original stocks. They are located on Stainland Road roughly 550 yards east of the post office and are a Grade-II listed building.[6]

Part of the Anglican Diocese of Wakefield, Christ Church is Barkisland's only church and is linked with the nearby school.[7]

Barkisland Hall is a Grade-I listed country house built for John Gledhill in 1638, constructed in stone in three storeys to an F-shaped floor plan. It was bought in 1967 by Lord Kagan to provide accommodation for his textile company (makers of the Gannex raincoat).[8]

Barkisland Primary School is a Church of England junior and infant school.[9]

Barkisland School Association (BSA) is a parent-teacher organisation supporting the school by organising events and fundraising.[10]