Rickling, which includes Rickling Green, is a village and ancient parish in the Uttlesford hundred of Essex. The village is situated approximately six miles north of the town of Bishop's Stortford. Saffron Walden, at five miles, and the larger village of Newport, at two miles, lie to the north-east.

Rickling is a mile north-west of the smaller village of Quendon. The two have formed the civil parish of Quendon and Rickling since the 1940s. Quendon is the site of the village's church, All Saints, and a few houses. Rickling Green, two miles from Rickling, is conjoined to Quendon.

The name Rickling is found in the Domesday Book as Richelinga, and means 'Ricola's people' – Ricola (also Ricula) was the wife of Sledd of Essex in the 6th century.[1][2][3] It is recorded as having quite a large population of 34 households, and it paid substantial taxes of eight geld units.[4] It is not known definitively why the main population today at Rickling Green is so far from its church at Rickling, but it has been suggested this may have been due to the plague.[2] Another theory is that, over time, the villagers settled closer to the once busy drovers' road (the former A11) that runs through Quendon.[5]

There is a small primary school in Rickling Green, serving the village and surrounding communities and joined in federation with Farnham primary school, with the schools sharing one head teacher and governing body.

There is also a public house, The Cricketers Arms, Rickling Green (not to be confused with The Cricketers in nearby Clavering), which overlooks the green. The village green is also home to Rickling Ramblers Cricket Club.[6] Cricket has been played on the green since 1850 and takes place throughout the summer months.[2] 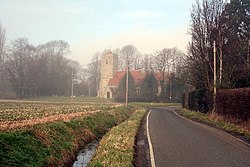 All Saints, Rickling is located some distance north of the main village centre at Rickling Green

All Saints Church at Rickling is a 13th-century flint church, although the nave's unusual proportions may indicate an earlier plan. The chancel, south aisle and west tower were built in 1340. There were later alterations in the 15th and 16th centuries, with further additions and restoration in the 19th century. Significant features include the screen and pulpit.[7][8]

Rickling Hall, a Grade-II* listed farmhouse, stands on the site of a former castle and includes a moated castle mound to the south of the present building.[9] Rickling and Rickling Green contain a number of other listed buildings, many of them dating from the 17th century.[10]