In addition to military use, flights to Ascension Island take off from Brize Norton, which carry civilian passengers.

The station is home to Air Transport, Air-to-Air refuelling and Military Parachuting, with aircraft operating from the station including the Lockheed C-130 Hercules, Boeing C-17 Globemaster III, Airbus A400M Atlas and Airbus Voyager which replaced the now-decommissioned Vickers VC10 in September 2013[2] and the Lockheed TriStar in March 2014.[3]

Major infrastructure redevelopment began in 2010 ahead of the closure of RAF Lyneham in 2012, at which point Brize Norton became the sole air point of embarkation for British troops.[4] 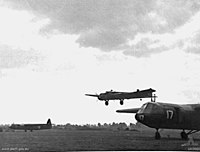 A glider tug coming in to land between Horsa gliders at RAF Brize Norton, October 1943

Construction of RAF Brize Norton began in 1935 with the official opening taking place on 13 August 1937.[5] The station was originally to be named RAF Carterton, given its proximity and relationship with the town of the same name, but was instead named RAF Brize Norton to avoid possible confusion with RAF Cardington in Bedfordshire.[6] The station's first unit, No. 2 Flying Training School (2 FTS) transferred from RAF Digby in Lincolnshire on 7 September 1937.[7] On 10 October 1938, 2 FTS was joined by No. 6 Maintenance Unit (6 MU).[7]

One of the first operational squadrons to use the airfield was No. 110 Squadron which was mainly based at RAF Wattisham but a detachment used Brize Norton from June 1939 with the Bristol Blenheim Mks I and IV.[8] 2 FTS was renamed No. 2 Service Flying Training School (2 SFTS) in September 1939, when it re-equipped with the Airspeed Oxford. No. 16 Service Training School, equipped with North American Harvards moved to Brize Norton in June 1940. On 16 August, the airfield was attacked by German bombers, with 35 Oxfords and 11 Hawker Hurricanes destroyed.[9] 16 SFTS left later that year, but 2 SFTS and 6 MU continued to use the airfield, with No. 1525 Beam Approach Training Flight arriving in February 1942.[7]

The No. 110 Squadron detachment left Brize Norton on 17 March 1942, when the squadron departed for the Far East.[8] The two flying training units left on 16 July 1942 to make way for a new user, the Heavy Glider Conversion Unit (HGCU), equipped with Whitley glider tugs and Horsa gliders.[7] No. 296 Squadron and No. 297 Squadron both moved in on 14 March 1944 with their Armstrong Whitworth Albemarles,[10] displacing the Heavy Glider Conversion Unit, which moved to RAF North Luffenham. The two Squadrons took part in the Invasion of France on 6 June 1944 and Operation Market Garden in September 1944,[7] before No. 296 Squadron added the Handley Page Halifax V to their inventory and moved to RAF Earls Colne on 29 September 1944. No. 297 Squadron also moved to Earls Colne a day later.[10]

The HGCU (soon renumbered 21 HGCU) returned on 15 October 1944, remaining at Brize Norton until 31 December 1945. The Transport Command Development Unit (TCDU) moved in during 1946, operating a variety of equipment until it departed in June 1949.[7] No. 297 Squadron returned after the Second World War ended, on 5 September 1946 with the Halifax Mks A.7 and A.9 from RAF Tarrant Rushton before leaving on 21 August 1947 for RAF Fairford.[10] After the TCDU left in June 1949, 2 Squadron of the Central Flying School, equipped with Harvards, moved in, followed by No. 204 Advanced Flying School, equipped with de Havilland Mosquitos, staying at Brize Norton until March and June 1950 respectively.[7]

By 1950 elements of American Strategic Air Command (SAC) were based at RAF Lakenheath, RAF Marham, and RAF Sculthorpe. The increasing tension of the Cold War led to a re-evaluation of these deployments. By 1953 SAC bombers began to move further west, behind RAF fighter forces, to Brize Norton, RAF Greenham Common, RAF Upper Heyford, and RAF Fairford. As with the other stations it occupied, SAC invested heavily in extending the runway 6,000 to 9,000 feet, taxiways and dispersals, as well as constructing accommodation and weapons handling facilities. This work was completed in April 1951.[11]

The station was transferred from United States Forces in Europe to the Strategic Air Command effective from 8 December 1952. 30th Air Depot Wing became the 3rd Air Force unit responsible for control of all personnel at Brize Norton, upon receipt of instructions to control base functions.[12] The station was assigned to the 7th Air Division and operated by the 3920th Air Base Group, which was renamed as the 3920th Combat Support Group, and then the 3920th Strategic Wing in 1964. The 3920th ceased operations in 1965.[13][14]

The first major USAF deployment was that of 21 Convair B-36 Peacemaker strategic bombers of the 11th Bomb Wing for eight days in June 1952. Boeing B-29 Superfortress and the KB-29 tanker variant of the 301st Bombardment Wing were based at Brize Norton on temporary duty from December 1952 to April 1953.[7]

From September 1953, units equipped with the Boeing B-47E Stratojet six-engined bombers began to be deployed to Brize Norton on 90-day temporary deployments, with boom-equipped Boeing KC-97G Stratofreighters also being deployed in support from December 1954.[7] Brize Norton was closed for runway repairs in 1956.[7] Later deployments included KC-97 and Boeing KC-135 Stratotanker and the first Convair B-58 Hustler and Boeing B-52 Stratofortress bombers to land in the United Kingdom.[7]

From 1958, B-47 deployments changed from 90-day temporary deployments to 30-day Reflex Alerts, in which the aircraft did little flying, but were held at a high degree of readiness (armed with nuclear bombs) on special aprons on the south side of the airbase.[7][15] In September 1964, the USAF announced that Reflex operations would cease and that Brize Norton would be handed back to the RAF.[13][14]

Back to Royal Air Force control

With RAF Lyneham, the home of RAF Transport Command's Bristol Britannia and De Havilland Comet fleets operating at capacity, the planned introduction to RAF service of the Vickers VC10 and Short Belfast created a requirement for an additional major strategic transport airfield. The planned withdrawal of the United States Air Force, its long runway and close proximity to army bases in the south of England, resulted in Brize Norton being selected for the role in 1963.[16]

While the base was formally returned to the RAF on 1 April 1965, the last SAC aircraft, a B-47E of the 380th Bombardment Wing left the base on 3 April, while USAF personnel finally left on 31 May.[7]

Both No. 10 Squadron, equipped with the Vickers VC10 C.1 jet transport[17] and No. 53 Squadron equipped with the Short Belfast C.1 heavy lift turboprop freighter moved from RAF Fairford in May 1967.[18] As facilities at Brize Norton were still unfinished, they used RAF Lyneham as a passenger terminal until October 1968.[15]

101 Squadron reformed at Brize Norton on 1 May 1984,[22] 101 Squadron flew converted civil VC10s, heavily modified and updated by British Aerospace for military service as aerial refuelling tankers between 1983 and 1993. Of the 39 airline aircraft acquired by the RAF, 13 were converted, while the remainders were used for spare parts. These converted VC10s were all 3-point tankers; capable of refuelling one aircraft (typically another large aircraft) using the main hose or two smaller aircraft using the underwing pods. The variants were known as K.2, K.3 and K.4.[23]

Following the Falklands War, the RAF found itself lacking in the strategic transport capabilities required to sustain the expanded military presence there. As a result, 216 Squadron was reformed at Brize Norton in November 1984,[24] initially flying six ex-British Airways TriStars, followed by three more from Pan-Am.[25]

Work to repair and upgrade the runways commenced in April 2007, and repatriation of British personnel was transferred to RAF Lyneham at the same time.[28] With the closure of RAF Lyneham taking place in late 2011, the repatriation transferred back to Brize Norton on 8 September 2011. To accommodate the repatriation services, a purpose-built centre was constructed,[29] and an exit gate was refurbished and formally named the Britannia Gate.[30]

Redevelopment as a transport base 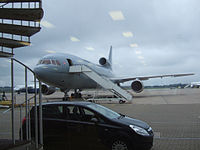 Brize Norton was subsequently redeveloped as the major airbase for the RAF's transport fleet. The end of flying from RAF Lyneham in September 2011 made Brize Norton the sole "Air Point of Embarkation", the main operating base for RAF air transport and in-air refuelling aircraft, and home to 15% of RAF uniformed manpower.[31] All the RAF's fixed wing transport assets were consolidated at Brize Norton, with the transfer of the entire Hercules force, together with the entry into service of the Airbus A400M and the Voyager.[32]

To accommodate this expansion (with the number of aircraft stationed at Brize Norton increasing from 28 to 67),[33] a major infrastructure redevelopment, "Programme Future Brize" was established in 2009. The project involved the overhaul of virtually every element of the airfield's infrastructure, including IT, engineering, housing and personnel.[34]

On 25 January 2011, a new station chapel and chaplaincy centre was opened by the RAF Chaplain-in-Chief, The Venerable (Air Vice Marshal) Ray Pentland.[35]

By March 2011, 70 buildings had been refurbished on the station.[36] As part of work to prepare for the introduction of Voyager aircraft into active service, a new hangar and office complex was opened in the same month.[37]

The Hercules fleet at RAF Lyneham officially moved to Brize Norton on 1 July 2011. The final four aircraft flew to the station, conducting a flypast over Wiltshire. Group Captain John Gladstone, Station Commander of RAF Lyneham, flew the lead Hercules, which carried the standards of the Hercules squadrons. These were presented to the Station Commander of RAF Brize Norton, Group Captain Dom Stamp in a welcoming ceremony.[38]

In February 2012, work started on converting a Second World War hangar located north of the main airfield site into new accommodation for the RAF Tactical Medical Wing (TMW) and No. 4626 (County of Wiltshire) Aeromedical Evacuation Squadron (RAuxAF). The work, which cost £15 million, included provision of a single storey temperature-controlled facility within the hangar for the TMW's operational stores facilities, office accommodation, a training building and external training area. The facilities opened in July 2013 and allowed the TMW and No. 4626 Squadron to move to Brize Norton from RAF Lyneham.[39][40]

A new maintenance hangar capable of accommodating three Airbus A400M Atlas aircraft was officially opened by Minister for Defence Procurement Guto Bebb on 1 February 2018. The hangar, located on the eastern side of the airfield, cost approximately £70 million and was designed to provide 24,000 square metres of floor space.[42]

In September 2018, No. 2 Squadron RAF Regiment, which provides protection to the Air Mobility Force, moved to the station from RAF Honington in Suffolk.[43]

An RAF A330 Voyager landing at RAF Brize Norton

Civilian passengers had been permitted on flights to and from RAF Ascension Island with reservations handled by AW Ship Management, with some customers doing package deals combined with the RMS St Helena, which travelled between Saint Helena and Cape Town, South Africa until the opening of St Helena Airport to passenger flights.[45][46]

No. 38 Expeditionary Air Wing was formed at Brize Norton on 1 April 2006 to create a deployable air force structure.[47]

The station magazine is called 51º North, in reference to the latitude of Brize Norton (51º 45'). The magazine is distributed to station personnel, their families and the local community and is available on-line.[53]

The station featured in the 2013 observational documentary series Inside RAF Brize Norton. The seven-part series followed activity at the station during 2012 and was shown on Sky One.[54]