Brize Norton is a village and parish a mile east of Carterton in the Bampton hundred of Oxfordshire. The 2011 Census recorded the parish population as 938.[1] The original part of RAF Brize Norton is in the parish.

Around the time of the Domesday Book in 1086 the village's toponym was Norton, being the north tun (Old English for village) of Bampton.[2] In 1235 the form Suthnorton ("South Norton") was recorded, evidently to distinguish it from other Nortons further north in Oxfordshire such as Chipping Norton.[2] By the 1260s the form Norton Brun was in use, referring to the Brun or Brown family who were the parish's manorial lords.[2] Further variants included Brunesnorton in 1297, Brimes Norton in 1303 and Brynes Norton in 1376, but the Norton Brun form outlived them and was still in use early in the 17th century.[2] The form Brysenorton had appeared by 1523, and by the middle of the 17th century it had become the usual form of the name.[2] However, Norton Brun had evolved into Norton Broyne and remained in use in church records until early in the 19th century.[2]

The Church of England parish church of Saint Britius is Norman. The south doorway with its decorative tympanum, a doorway in the south wall of the chancel and the font date from this time.[3] The porch is in the Transitional style from Norman to Early English Gothic,[3] which suggests that it was added slightly later. Early in the 13th century the north aisle was added, with a four-bay Early English Gothic arcade linking it with the nave.[4] In the second half of the 13th century the bell tower was added at the west end of the north aisle and the present east window of three lancets was inserted in the chancel.[4] A chapel forms an eastward continuation of the north aisle.[4] Two of its windows are original 13th-century lancets; two square-headed windows were added in the 14th century and the east window of the chapel is modern.[4] The Gothic Revival architect G.E. Street restored the building in 1868.[4]

The tower has a ring of six bells but they are currently unringable.[5] The tenor bell was cast by Edward Neale of Burford[6] in 1679.[5] Three more were cast by Mears and Stainbank of the Whitechapel Bell Foundry[6] in 1873.[5] The two youngest bells were cast by John Warner and Sons of Cripplegate[6] in London: one in 1881 and the present treble bell in 1884.[5] St Britius has also a service bell cast by Naylor, Vickers and Company of Sheffield[6] in 1860.[5]

Brize Norton Primitive Methodist chapel[7] was built in 1908. It is now a private house.

In 1861, the East Gloucestershire Railway was built through the parish from Witney to Fairford. The company provided a railway station a mile south of the village on the road to Bampton, and called it Bampton station despite it being much nearer Brize Norton than Bampton. RAF Brize Norton was established in 1937. In 1944, the Great Western Railway renamed the station Brize Norton and Bampton to reflect the increasing importance of the RAF station. British Railways closed the line and station in 1962. The site of the station is now a small industrial estate. 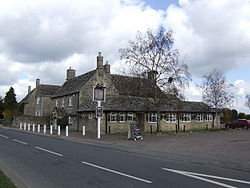 Brize Norton has a village recreational ground, with football and cricket ground surrounded by the Elderbank Village Hall and Sports Pavilion.

Brize Norton has a primary school which serves children both from the village and from nearby Carterton.[10]