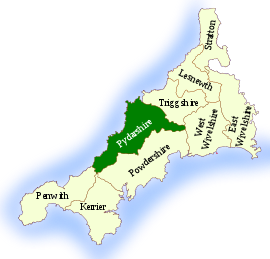 The Hundred of Pyder or Pydershire is one of the ten hundreds of Cornwall, along the middle north coast of the county, with the Hundreds of Penwith to the west; Triggshire to the north-east, divided from it by the River Camel and its estuary; and Powdershire to the south, divided from Pyder in the middle of Cornwall. The hundred is spelled as Pyder in census reports and by the Ordnance Survey, but it can also be spelled Pydar, and hence Pydarshire.

Pydershire includes many of the famous seaside resort villages on Cornwall's north coast, and the abandoned mining landscape around St Agnes. It had a population of 62,813 in 2011.