Lanhydrock is a grand country house and estate in the midst of Cornwall. It belongs to the National Trust. Lanhydrock is also a parish centred on the estate.

The name of the parish is for the Cornish language, and means "church of St Hydrock"

The Parish of Lanhydrock is in the Deanery of Pydar, within in the Diocese of Truro. The church is services as part of the Bodmin Team Ministry.[2]

The parish church is dedicated to St Hydrock and stands in the grounds of Lanhydrock House. Parts date back to the late 15th century and the church has a chancel, nave, north and south aisles and three-stage battlemented tower with one bell.[3] 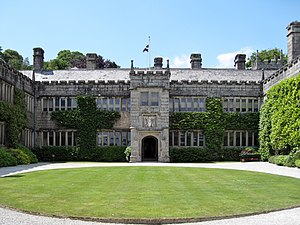 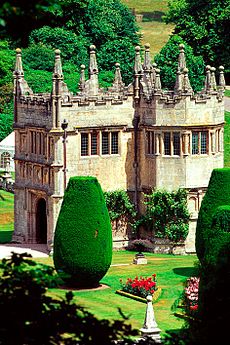 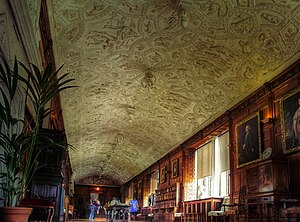 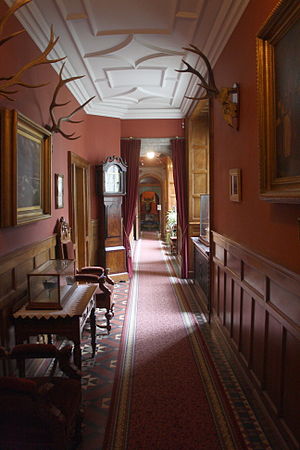 A corridor within the property

The great house stands in extensive grounds of 890 acres above the River Fowey. It has been owned and managed by the National Trust since 1953.

Much of the present house dates back to Victorian times but some sections date from the 1620s. It is a Grade I listed building[4] and is set in gardens with formal areas. The hill behind the house is planted with a fine selection of shrubs and trees.

Lanhydrock estate belonged to the Augustinian priory of St Petroc at Bodmin but the Dissolution of the Monasteries during the 1530s saw it pass into private hands. In 1620 wealthy merchant Sir Richard Robartes acquired the estate and began building Lanhydrock House, designed to a four-sided layout around a central courtyard and constructed of grey granite. Robartes died in 1624 but work on the building was continued by his son John Robartes, 1st Earl of Radnor, a notable public figure who served as Lord Privy Seal and Lord President of the Council.

During the 18th century the east wing of the house was demolished leaving the U-shaped plan seen today. In 1881 a major fire destroyed the south wing and caused extensive damage to the central section. Of the main house only the north wing, with its 95-foot Long Gallery, and the front porch building survived intact, though the original gatehouse also dates back to the mid 17th century. New sections were built behind the south wing, including a kitchen block, in the style of the original building - which was unusual at the time.

The Robartes family declined significantly during the First World War, including the heir Thomas Agar-Robartes MP, who was killed during the Battle of Loos in France, trying to rescue a colleague from no-man's land. Only one descendant survives, living in a cottage on the estate.

Most of the current building, therefore, dates from late Victorian times. The second Lord Robartes (later the 6th Viscount Clifden) rebuilt the house to meet the needs of his large family, appointing local architect Richard Coad to design and supervise most of the work. Coad had previously (1857) worked as assistant to George Gilbert Scott on earlier work at Lanhydrock.

In 1953 the house and approximately 395 acres of parkland were given to the National Trust by the 7th Viscount Clifden. The public tour is one of the longest of any National Trust house and takes in the service rooms, nurseries and some servants' bedrooms, as well as the main reception rooms and family bedrooms. In 2004 it was one of the Trust's ten most visited paid-entry properties, with over 200,000 visitors.

Parts of the estate have been designated as an Important Plant Area, by the organisation Plantlife, for its ancient woodland and lichens.[6]

Lanhydrock was the main setting for a 1996 film version of Twelfth Night directed by Trevor Nunn, and (in which Helena Bonham Carter played Olivia). Its grounds provided IOlivia's sumptuous Illyrian estate.