Perranzabuloe is a coastal hamlet in Cornwall.

The Parish of Perranzabuloe includes Perranporth, a larger village just over a mile to the north, though the parish church remains at Perranzabuloe. The town of Newquay is seven miles to the north along the coast. 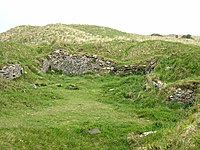 The name of the parish derives from the mediæval Latin Perranus in Sabulo meaning Piran in the sand. The name refers to St Piran (the patron saint of Cornwall) who founded an oratory church in the seventh century near the coast north of Perranporth. In the Middle Ages, the parish of Perranzabuloe was a peculiar of Exeter Cathedral. Perranzabuloe at that time exercised ecclesiastic control of St Agnes: the latter's church was a chapelry of Perranzabuloe. In 1846 St Agnes became a separate ecclesiastical parish.[1]

The site of the oratory of St Piran is in the extensive sand dunes known as Penhale Sands.[2][3] Legend has it that St Piran landed on Perran beach from his native Ireland and built the oratory in the Irish style. The first oratory was probably built of wattle and daub and replaced in stone at a later date. The oratory was very simple in plan and was barely 30 feet long. Local community groups have established a fund for re-excavation of the site which began in early 2014.[4][5] Three carved stone 'Celtic' heads, of a man, woman, and cat are in the care of the Royal Cornwall Museum.[6]

The encroachment of the sand led to the oratory's abandonment in the 10th century. The noted 17th-century antiquary Richard Carew wrote:

St Piran too well brooketh his name in Sabuloe: for the sand carried up by the north wind from the seashore daily continueth covering and marring the land adjoinant, so as the distress of this deluge drove the inhabitants to remove their church. Howbeit when it meeteth with any crossing brook, the same (by a secret apathy) restraineth and barreth his farther encroaching that way. It was in consequence of this notion that the inhabitants, thinking such situation secure, removed their church only about 300 yards, it being on the opposite side of the brook.[7]

When the oratory was abandoned, another church (now known as St Piran's Old Church) was built nearby on the inland side of the stream. As mentioned by Carew (above) it was thought the stream would protect the church from encroachment by sand. This proved to be the case for several hundred years and the church, completed by the 12th century, was enlarged in 1462. However, mining for tin caused the stream to dry up and eventually the church was engulfed by the dunes. The last service was held in 1795 after which the old church was partially dismantled and the materials used to build a new church inland. However, the old church's graveyard was used for burials until 1835 before sand enveloped it.[8] 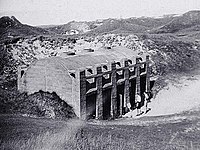 St Piran's Oratory in 1952, with a protective shell

St Piran's Cross (believed to be the earliest recorded stone cross in Cornwall) stands in the dunes between the oratory site and the graveyard of the old church. It is dedicated to tinners and miners and stands eight feet high.[11]

In Saxon times there was also a monastery (known as Lanpiran or Lamberran) near the oratory site but it was disendowed c1085 by Robert of Mortain.[1] The relics of St Piran were preserved in St Prian Old Church which became a centre of pilgrimage. The relics are recorded in an inventory made in 1281 and were still venerated in the reign of Queen Mary I according to Nicholas Roscarrock's account.

The present parish church is situated in Perranzabuloe hamlet. It was dedicated to St Piran in July 1805.[1] Much of the structure is built of materials retrieved from St Piran's Old Church. Perranzabuloe church has a chancel and nave, a south aisle, and north and south transepts. One of the aisles is known as the Chyverton aisle and housed a pew belonging to the notable local family. The three-stage tower is battlemented, pinnacled and houses a ring of three bells.[1] On 5 August 1878 there was a service by the Bishop of Truro, to re-opened the church following a renovation with new pews and a ″wagon-headed″ roof for the chancel, to divide it from the nave.[12]

St Piran's Day is celebrated on 5 March. The main event in the parish is a march across the dunes to St Piran's Cross. Thousands of people attend, generally dressed in black, white and gold, and carrying Saint Piran's Flag, generally known as the Flag of Cornwall. A play of the Life of St Piran, spoken in Cornish, has been enacted in recent years at the event. Daffodils are also carried and placed at the cross.

Southwest of Zelah but in Perranzabuloe parish is Chyverton House and its grounds. Nearby was a notable lead mine called West Chiverton Mine which produced 45,100 tons of lead ore in the period 1859–86. There were seven more less successful mines which also included "Chiverton" in their names.[13] West Chiverton Mine had an 80-inch pumping engine; in 1870 it had a workforce of 1000 and a main shaft over 700 ft deep but the mine closed in 1886.[14]

St Piran's well at Perranwell was demolished (before 1925) and the stones removed to Chiverton. According to tradition it was a cure for rickets.[15]