St Newlyn East is a village in Cornwall approximately three miles south of Newquay. The name 'St Newlyn East' is locally abbreviated to Newlyn East. The parish is named after the patron saint of the church, St Newlina. 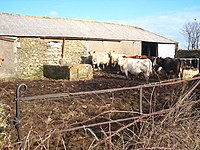 The Lappa Valley Steam Railway tourist attraction operates near Newlyn East. At Trerice is the Tudor mansion of the Arundells now in the care of the National Trust. To the northeast is Tresillian House.

The church was founded in Norman times and rededicated in 1259. Most of the present building is of the 14th and 15th centuries. There is a fine Norman font.[2]

Cargoll Farm Barn is a listed 15th century barn which belonged to the manor of Cargoll. The manor was recorded in the Domesday Book (1086); it was then held by Robert, Count of Mortain, from Bodmin Monastery. There were two hides of land and land for 15 ploughs. The lord held land for 3 ploughs with 16 serfs, and 16 villeins and 22 smallholders had land for 6 ploughs. There was also a mill which paid 2/6, 4 acres of woodland and 2 square leagues of pasture. The livestock was 12 mares, 7 cattle, 7 pigs, 60 sheep and 12 goats. The value of the manor was £3 sterling though it had formerly been worth £10.[3] This manor and the advowson of the church were purchased by the Bishop of Exeter in 1269 from the Valletorts. The lands of the manor were extensive and it is likely that the bishop's palace within the manor was at Lanner in the parish of St Allen, rather than at Cargoll itself. In 1283 the manor was appropriated by Bishop Peter Quivel to the chancellorship of the cathedral and thereafter several generous gifts were made to the church by the chandellors.[4] At Cargoll a fair and annual market were held from the year 1311 onwards.[5]

On 9 July 1846 a disaster at the East Wheal Rose mine was caused by an unusually heavy thunderstorm which flooded the mine. Thirty-nine of the miners (mainly inhabitants of the village and its immediate vicinity) were drowned.[6] The mine was eventually closed in 1881.

After the disaster, villagers of St Newlyn East worked together and dug a pit in remembrance of the miners who died. The pit is still there today, and has been used frequently for church meetings and tea gatherings etc. When the pit was actually made, it was also used for Cornish wrestling, and was recently re-dug and made more usable with funding from the National Lottery Fund.

The St Newlyn East Pit was already in existence at the time of the mining disaster and was used by a local preacher to preach sermons, as it provided shelter when the weather was inclement. It was originally an abandoned quarry. After the mining disaster, the pit was graded into tiers and dedicated to the memory of those who died in the disaster. It was restored with the aid of lottery funds in about 2003. More recently, the lease was taken over by the Parish Council and a new Management Committee formed to manage and promote the use of the Pit.