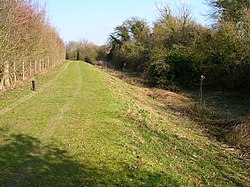 Towing path and canal bed of the Portsmouth and Arundel Canal near Woodgate, Sussex

The Portsmouth and Arundel Canal was a canal that ran between Portsmouth in Hampshire and Arundel in Sussex, built in 1823. It was never a financial success and was abandoned in 1855. The company was wound up in 1888.[1]

The canal was built as part of a larger scheme for the construction of a secure inland canal route from London to Portsmouth, which would allowed craft to move between the two without having to venture into the English Channel and possibly encounter enemy ships or natural disaster. The Portsmouth and Arundel Canal was built by the Portsmouth & Arundel Navigation company.

The canal was made up of three sections: a pair of ship canals, one on Portsea Island and one to Chichester, and a barge canal that ran from Ford on the River Arun to Hunston where it joined the Chichester section of the canal.[2]

This section links to Chichester Harbour at Birdham with the junction at Hunston.[4] It contains two locks one of which is a sea lock.[4] The canal was built to ship canal standards and was built 8 feet deep and 46 feet 8 inches wide.[4]

The Chichester Ship (or Barge) canal ran from the sea lock at Birdham to the junction of the Portsmouth and Arundel Canal at Hunston and then North to a basin in the south of the city of Chichester.[5]

The Portsea section was connected to the rest by way of a 13-mile channel dredged through Chichester Harbour, past the southern side of Thorney Island (the original plan was to go around the northern side) and to the north of Hayling Island, and finally across Langstone Harbour.[2] To ease passage between the Chichester and the Portsea sections a steam vessel, the Egremont, was made to tow 40-ton barges in trains of six.[8] For a while the company also made Portsbridge Creek navigable.[9]

To supply the canal with water, a pumping engine was installed at Ford to pump water from the Arun.[3] Since the Arun is tidal at Ford, the Act of Parliament only allowed water to be taken from the river between 2 hours after high water and one hour after low.[3] This was to prevent salt water from entering the canal.[3] In order to allow the passage of masted ships iron swing bridges were fitted to the Chichester and Portsea sections rather than the more typical hump back canal bridge.[11]

From the beginning the canal was plagued with various problems, and in 1827 the Portsea section of the canal had to be drained due to complaints about salt water contamination in some of Portsmouth's wells. In 1845 parts of this section were sold to the London and Brighton railway company with another section being sold to the company in 1851.[11]

In 1830 tolls were reduced and for a while traffic picked up with cargoes including 20 tons of marble from the Mediterranean for the king. In the same year the company made Ports Creek navigable to allow the passage of barges around the north of Portsea Island to Portsmouth Harbour.[9] The canal was also used to transport gold and silver for the Bank of England.[13]

The canal was unable to compete with the sea routes and by 1832 the canal company was being forced to do the carrying itself. By 1847 the canal, with the exception of the Chichester arm, had ceased to be navigable.[14] 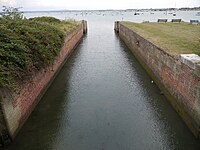 On the remaining Portsea Section the issue of maintaining the various bridges became an issue of concern until the company managed to buy itself out of the requirement to maintain them.[11]

The Chichester arm was transferred to the Chichester corporation in 1892, the same year in which the canal company was wound up (the winding up order having been applied for in 1888).

After the canal company

Some visible remains of the Portsea Section still exist in 2011. A section of the Portsmouth-London mainline railway]] follows the course of the canal between Portsmouth and Southsea and Fratton stations. Beyond them Goldsmith avenue was constructed along the line of the canal.[15] Off Goldsmith Avenue, the east-west route of the canal can still be traced by more recent residential development along Old Canal and Towpath Mead roads

The tow-path follows the course of the foot-path just north of the caravan site and allotments on the south side of Locksway Road at its easternmost end, with the canal to the north side of this. There is evidence that the canal was filled in here with coke from the local gas works. The remains of the lock into Langstone Harbour are also still in evidence.[16] The lock has been a conservation area since 1977 and is a grade II listed structure.[16] In 1979 Portsmouth City Council agreed to spend £35,000 over the next decade to refurbish the lock.[17]