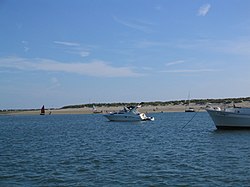 Chichester Harbour is a large natural harbour to the southwest of the city of Chichester on Spithead, across the boundary of Sussex with Hampshire. It is one of four natural harbours in that area of the coastline, the others being Portsmouth Harbour, Langstone Harbour and Pagham Harbour.

The harbour and surrounding land is managed by Chichester Harbour Conservancy.

Chichester Harbour is one of the few remaining undeveloped coastal areas in southern Great Britain and remains relatively wild. Its wide expanses and intricate creeks are at the same time a major wildlife haven and among some of Britain's most popular boating waters.

Geographically it is a ria; a flooded valley filled at the end of the last Ice Age.

The massive stretch of tidal flats and saltings are of outstanding ecological significance. Very large populations of wildfowl and waders use the mudflats feeding on the rich plant life and the huge populations of intertidal invertebrates. More than 7,500 Brent geese overwinter on the intertidal mud-land and adjacent farmland and more than 50,000 birds reside in or visit the Harbour throughout the year.

The harbourside villages are:

The nearest towns are Havant, Chichester and Hayling Island. The harbour lowlands contain high quality arable farmland and boatyards, marinas and commercial fishing are important elements of the local economy.

This is one of the south coast's most popular sailing waters with as many as 12,500 craft regularly using the harbour, with competitive racing taking place among the 14 sailing clubs of the Chichester Harbour Federation. The villages, sea walls and footpaths are a popular leisure area for residents and tourists alike.

Set up by Act of Parliament in 1971, Chichester Harbour Conservancy has the duty to conserve, maintain and improve the harbour and amenity area for recreation, natural conservation and natural beauty. As well as being the statutory harbour authority, the Conservancy manages the Area of Outstanding Natural Beauty (AONB).

To the south west of the entrance to Chichester Harbour is Chichester Bar, a shallow spit which can present a significant navigation hazard at all states of the tide. The entrance to the harbour is deep with a fast tidal stream and to the east of the main harbour entrance channel is a gravel bank known as The Winner.

The east side of the harbour entrance is an area of geographical, recreational and conservation interest known as East Head. It is a large sand dune linked to land by a narrow area known as The Hinge. In recent years The Hinge has been breached by several storms and then repaired. There is much debate about whether and how it should continue to be repaired.

The western boundary with Langstone Harbour is defined by an historic causeway known as the wade way, once the principle access from Hayling Island to the mainland, but since bisected by a deep channel for the Portsmouth and Chichester Canal in the 1820s, and no longer safely traversable.

Chichester Harbour is designated an Area of Outstanding Natural Beauty and also as a Site of Special Scientific Interest,[1] a wetland of international importance, a Special Protection Area for wild birds and a Special Area of Conservation. The harbour is of particular importance for wintering wildfowl and waders of which five species reach numbers which are internationally important.

The harbour is considered to be of national and international importance for nature conservation.

There are a number of habitats including a large area of salt marsh habitat and mudflats which are exposed at low tide. These areas are particularly important for wintering birds. Chichester Harbour is a designated Bass Nursery Area.

Chichester Harbour is used for a wide variety of sailing, from dinghy racing to yacht marinas. It was the place where the renowned 'Itchenor Gallon' race for the International 14 was held. It is also used for fishing.

Harbour tours depart year round from Itchenor in either a traditional boat or in Solar Heritage - a solar powered boat. During the summer regular trips depart from Emsworth on Solar Heritage and on the Victorian oyster boat Terror.

The harbour is very popular area for birdwatching, guided bird walks and boat trips are offered during the winter months by Chichester Harbour Conservancy.

There is a good network of footpaths for walkers and a cycle route from Chichester to West Wittering which passes through harbour countryside.

West Wittering Beach and East Head is the only sandy beach on the Sussex coast and is a very popular family and tourist destination on warm weekends.