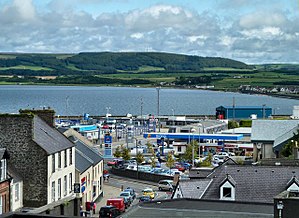 From the top of the Castle of St John, Stranraer

Inch is a parish in Wigtownshire by the shore of Loch Ryan, consisting of the port town of Stranraer and a scatter of hamlets and villages. The parish is 10 miles long and in one part nearly of the same breadth, comprising 30,600 acres

The northern section of the parish lies between Loch Ryan and the Water of Luce and consists of hills and heath. The southern section lies chiefly in the isthmus between Loch Ryan and Luce Bay, and is low and gently undulating. The principal town is Stranraer. The Water of Luce, which flows south into Luce Bay, divides the parish from New Luce to the east.

At Lochans Village there is a Community Centre and Primary School. Nearby is Kilhilt (also spelt Kinhilt), which gave its name to the Barony of Killhelt. The village of Castle Kennedy, three miles east of Stranraer, is named after the castle which was built in 1607, and burned down in 1716. Stranraer remains the only town in the parish.

On 9–10 February 1307 the Battle of Loch Ryan was fought in Inch - Robert the Bruce sought to occupy his ancestral lands in Carrick, but his forces and those of his allies were overwhelmed by the local army of Dungal MacDouall.

This area has been known as, and has been recorded in deeds and charters, as Inch and Insche from about the 15th century, and was divided between baronies, amongst the several feudal baronies into which the shire was divided. In 1608 it is recored that William Adair, Commendator of Soulseat Abbey, was served heir to his father, Ninian Adair of Kinhilt, to the 4 merklands of Stranraver, to the port and burgh of the Barony of Stranraer, Inch, together with many lands in the Barony of Kinhilt, Inch.[1] Inche baronia is referred to in a deed dated 16 December 1528.[2]

From c.1400s the Kennedy family were baillies of Inch Parish, collecting taxes and owning and leasing property.[3] Gilbert Kennedy, Earl of Cassillis, a powerful man in Galloway, was granted Ochterlour, south of Stranraer in Inch Parish.[4][5]

On 25 June 1942 during Second World War, when making his second visit to the United States, Winston Churchill flew out of Loch Ryan on a flying boat to meet President Roosevelt. During the war Cairnryan became an important No. 2 Military port. Two large piers were built and the harbour was used for troops coming from the USA after 1942. The area became an important centre for anti-U-boat operations. Flying boats operated from the loch to protect allied shipping making its way to Liverpool or Glasgow. With easy access to the North Atlantic, Loch Ryan was used as the surrender destination for the U-boats which were out in the Atlantic in 1945, and the U-boats and their crews were held at Cairnryan, before the boats were towed out to sea and sunk.

The Parish Church stands on the shore of Loch Inch, and before the Reformation it belonged to the Bishop of Galloway. Within the parish there existed two chapels, that of St John in Stranraer, and the chapel of St Patrick in Portpatrick. The latter was called the Black Quarter of the Inch, but became a separate parish in 1628. The church was located at the now-nonexistent village of Inch.[9]

Opposite the church, within the Loch, is an island, from which the area derives its name: inch is an Irish word for island, derived from the Gaelic innis. This island is about 600 yards in circumference, and formerly held a place of worship, vestiges of which are still remaining. It communicated with the land by a causeway and drawbridge. About 1130 St Malachy visited Galloway on three occasions and on one visit beside the Green Lake, he decided to plant a community, being influenced that it lay within a mile or so of the manor of Inch which was the seat of the Bishop of Galloway.[10]

Cairnryan Free Church began as an extension charge before the Disruption of 1843. It was separately sanctioned in 1844, with a church opened in the following year. It transferred to the United Free Church in 1900, but the minister retired in the same year and it was served by probationers and missionaries, and did not transfer to the Church of Scotland. The UFC charge was in the presbytery of Wigtown and Stranraer and the synod of Dumfries and Galloway. In 1858 the Parish of Loch Ryan was disjoined from that of Inch, and erected quoad sacra; the church of this parish had been built at Cairnryan a number of years prior in 1841. In 1941 the charge of Loch Ryan was united to Glenapp to form the session of Lochryan and Glenapp, and following the local union both parish churches remained in use for public worship. In 1985 the union between Glenapp and Lochryan was dissolved in favour of a union between Loch Ryan and Inch under the name of Inch. The kirk session sat within the Presbytery of Stranraer until 1963 when, by Act of Assembly, the Presbytery of Wigtown and the Presbytery of Stranraer were united together under the name of the Presbytery of Wigtown and Stranraer.

The chief antiquities include:

The remains of the 12th-century Soulseat Abbey are found by the herb garden on the south side of Soulseat Loch.[14][15]

The old House of Croach north-east of Meikle Laight farmhouse, was probably built c. 1460 after the lands were detached from the Agnew family estate in favour of William Agnew, 2nd son of Sir Andrew Agnew, and it was occupied by members of that family until 1701 when they built Lochryan House.[16][17] The ruined walls of Croach, east of Cairn Point, are about 4 feet wide.[18] Craig Caffie Tower was built around 1580 near Innermessan. In 1847 a lighthouse was built at Cairn Point at the northern end of the village of Cairnryan.

Inch is the gateway to Ulster, as ferries for Belfast and Larne in County Antrim set sail from Stranraer and Cairnryan on Loch Ryan. This is the shortest crossing between Britain and Ireland.

Brochs, forts and other monuments

A fortified town was located at Shinraggie or Shinriggie at the head of Beoch Glen. A broch is located at Craigcaffie,[13] while a motte is shown at Cults on old Ordnance Survey maps. There is a hut circle at Little Laight on the western flank of Laight Moor, 1,148 feet from the summit. White Cairn is located near the Shinriggie fortified town. There are crannogs at Cults Loch and Black Loch.

The Local History and Archaeology Group are taking part in the University of Glasgow's community archaeology project in Inch - Discovering Dumfries and Galloway's Past. From September 11–15, 2012 there will be a group working with Giles Carey doing a geo-physics survey of the area to the north of the motte at Innermessan between Stranraer and Cairnryan. It is a site with a very long history – from early Mesolithic ancestors, about 10,000 years ago to a mediæval town, now disappeared, which in its time was more important than Stranraer. The funding for the first phase of the study is until February 2013, but it is hoped that once the geo-physics investigations have taken place, further funding will enable a more thorough investigation over a three-year period.[19][20]

Innermessan was a mediæval town in the Parish of Inch[21] which now no longer exists.[22] Innermessan was the most considerable place in this part of the county until Stranraer was built.[23][24][25] "Innermeason" is recorded in a charter by King David II (1329 - 1371) to the Bishop of Galloway, "of the lands of Dermore, in the Rins within the town of Innermeasan.[26]

A mound at Balyett is thought to be the site of a Norman timber-built castle. Later in Innermessan's history the town grew around a substantial estate with power over the imports and exports in Loch Ryan and eventually became Loch Ryan's largest settlement.[21] Finds indicate that a Roman road passed through Innermessan.[22]