Belfast City Hall is the civic building of Belfast City Council. Located in Donegall Square, Belfast 1, County Antrim, it faces north and effectively divides the commercial and business areas of the city centre. 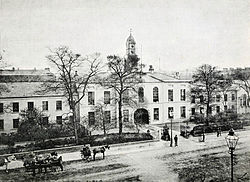 The White Linen Hall, or the Linen Hall Library as it was in 1888. Now replaced by the City Hall.

The site now occupied by Belfast City Hall was once the home of the White Linen Hall, an important international Linen Exchange. The street that runs from the back door of Belfast City Hall through the middle of Linen Quarter is Linen Hall Street.[1]

Plans for the City Hall began in 1888 when Belfast was awarded city status by Queen Victoria. This was in recognition of Belfast's rapid expansion and thriving linen, rope-making, shipbuilding and engineering industries. During this period Belfast briefly overtook Dublin as the most populous city in Ireland.[2]

Construction began in 1898 under the supervision of architect Sir Alfred Brumwell Thomas and was completed in 1906 at a cost of £369,000. Belfast Corporation, now the council, its their profits from the gas industry to pay for the construction of the Belfast City Hall. Local firms H&J Martin and WH Stephens were among the companies involved in the construction. James G. Gamble, architect, was the clerk of works.

The city hall in Durban, South Africa is almost an exact replica of Belfast's City Hall.[3] It was built in 1910 and designed by Stanley G. Hudson, who was inspired by the Belfast design. The Port of Liverpool Building, designed by Arnold Thornley and completed in 1913, is another very close relative.[4]

On 1 August 2006 the City Hall celebrated its centenary with a "Century of Memories" exhibition and family picnic day.[5]

The exterior is built mainly from Portland stone and is in the Baroque Revival style. It covers an area of one and a half acres and has an enclosed courtyard.

The Titanic Memorial in Belfast is located on the grounds of Belfast City Hall.

The pediment sculpture is by F. W. Pomeroy, assisted by local carver J. Edgar Winter, and features on the reverse side of the current series of £10, £20, £50 and £100 sterling banknotes issued by the Northern Bank.[6]

The design of the building is reminiscent of the Old Bailey in London.

Floodlights have been added to City Hall to light up the building in a variety of colours and combinations. Using the same technology as the Empire State Building in New York, a white illumination will be applied to the building, after dusk, and it will also be 'colour-washed' on special dates.[7]

The interior has a number of notable features including the Porte-Cochère and Grand Entrance, the Grand Staircase, the Reception Room and the Great Hall. The latter was destroyed during the Belfast blitz and was subsequently rebuilt.

Carrara, Pavonazzo and Brescia marbles are used extensively throughout the building as are stained-glass windows featuring among others the Belfast Coat of Arms, portraits of Queen Victoria and William III and shields of the Provinces of Ireland.

Various memorials are located in the building, including ones to Frederick Robert Chichester, Earl of Belfast, Sir Crawford and Lady McCullagh and the 36th (Ulster) Division. 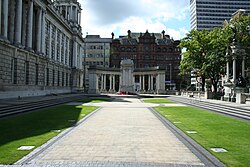 Garden of Remembrance and The Cenotaph in Belfast

The gardens surrounding the City Hall are a popular with office workers taking their lunch in the summer months, as well as tourists and teenagers gathering in their dozens to enjoy the green.

Various statues stand in the grounds, including one of Queen Victoria by Sir Thomas Brock. There is also a granite column dedicated to the American Expeditionary Force, many of whom were based in Belfast prior to D-Day.

Brock also designed the marble figure of Thane, the Titanic Memorial, in memorial to the victims of the sinking of the RMS Titanic. The ship was built in Harland and Wolff's shipyard located in the east of the city. The monument was originally located at the front gate of City Hall, at the junction of Donegall Square North and Donegall Place.

There is a memorial to Sir Edward Harland, the former head of the Harland and Wolff shipyard and Mayor of Belfast from 1885 to 1886. It too was sculpted by Thomas Brock.[9]

The grounds also house Northern Ireland's main war memorial, the Garden of Remembrance and Cenotaph, at which wreaths are laid on Remembrance Day.

James Magennis VC, the only Northern Irish recipient of the Victoria Cross during World War II, is also commemorated in the grounds. The Leading Seaman won the medal while serving in the Far East in 1945. A six-foot-high memorial to Magennis, made from Portland stone and bronze, stands in front of the City Hall. It was erected in 1999.

On 3 January 2006 Belfast City Councillors ratified a plan to erect a statue to the late Belfast footballer George Best in the grounds of the City Hall. Following approval from the Best family, the George Best Memorial Trust was created in December 2006. The trust's patron David Healy contributed £1,000 to the estimated total cost of £200,000.[10]

In October 2007 a Ferris wheel was constructed in the grounds, giving passengers panoramic views 200 ft above the city. The wheel had 42 air-conditioned capsules, which could hold up to six adults and two children. The wheel finally closed at 6:00pm on 11 April 2010 and was removed during May 2010.

In 2008, the Imjin River Memorial was relocated here when the St Patrick's Barracks in Ballymena closed. The memorial commemorates Irish[11] troops lost in the Battle of Chaegunghyon in January 1951 during the Korean War.[12]