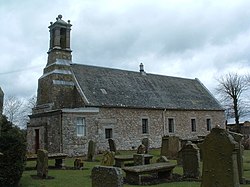 Pettinain is a village and parish in Lanarkshire. The parish is bounded to the north by Carstairs and Carnwath; to the east by Libberton; to the south-east by Covington; to the south-west by Carmichael; and to the west by Lanark. The parish's eastern, northern and western boundaries are all formed by the River Clyde. The West Coast Main Line passes through the parish, with the village itself three miles south-east Carstairs Junction. It is also six miles south-east of the county town, Lanark. The population in 2011 was 284.

The present building is the successor of earlier places of Christian worship upon or very close to this site. Little is known of the church’s origins, but it was a chaplainry attached to St Kentigern Church, Lanark, in 1150, when both churches were granted by David I to the abbot and canons of Dryburgh Abbey. In the mid-fifteenth century Pettinain appears to have been separated from its mother church, but it remained one of the possessions of the Dryburgh monks until after the Reformation in 1560.