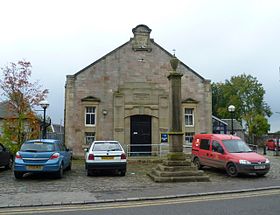 The Cross at Carnwath.

Carnwath is a moorland village and parish on the southern edge of the Pentland Hills of Lanarkshire. The parish's northern boundary also forms the border of Lanarkshire with Midlothian. The village itself lies about 30 miles south of both Edinburgh and Glasgow. It is bounded by the North Medwin and South Medwin watercourses. The name is from the Gaelic A' Chathair Nuadh, meaning "Ford of the cairn"[1]) The village has a population of approximately 1,500 people. Its proximity to the A70 makes it popular with commuters to Edinburgh.

The Wee Bush dates from the 1750s, built in connection with the turnpike road, now the A70, from Ayr to Edinburgh. This is the reason for its very prominent position, especially when seen when approaching on Main Street from the west, at right angles to the main road. Rabbie Burns was reputed to have visited here and when asked to name the house, to have said : "Better a wee bush than nae beild (shelter) at 'a ". The pub's landlady in the 1960s, Mrs Smith, had a small framed piece of paper behind the bar telling this story.

In the centre of the village is a cross built by Hugh Somerville, 5th Lord Somerville in July, 1516, in terms of the Charter granted by King James in 1514, which ordered a Market Cross to be erected. It is thought that it may have been erected in front of the old Dower House or could have been erected where it stands today, in the Market Square.

The Cross was blown down in a gale on the night of 16 February 1962. It was redressed and re-erected with a small metal cross on top, but it never had the same appearance. However, in 1970 a Mr Aitken, a Carnwathian, who had died in America, left $100 to enable a new urn to be placed on top, and this was duly done by the 3rd District Council. The Cross stands on four ascending steps, with a base and cornice, a shaft square and large in comparison with others

At the west entrance to Carnwath, adjacent to Carnwath Parish Church (1867), is St Mary's Aisle, the only remaining part of the Collegiate Church built in 1386. It is recognised as a Category A Listed Building. St Mary's Aisle is the mausoleum of the Lockhart family, and previously of the Earls of Carnwath and the Lords Somerville.

In 1630, the Carnwath estate, owned by the Earl of Mar was purchased by Sir Robert Dalzell, later to become Lord Dalzell. In 1639, his son, the 2nd Lord Dalzell and also named Robert, was further elevated to become the Earl of Carnwath. The title was forfeit in 1716 when the 5th Earl, Robert Dalzell became attainted due to his support of the Jacobite cause but the titles were restored in 1826.[1][2][3]

The Ordnance Gazetteer of Scotland (1882–1885) said of the village: "Long a dingy and disagreeable place, it has been greatly improved".[1]

There is a Gothic church that dates from 1798, directly abutting the former tiny church of 1424.

Carnwath railway station, originally part of the Caledonian Railway, later the London, Midland and Scottish Railway was closed in the Beeching Axe in the 1960s.

Famous people from Carnwath include author and critic, Robert Anderson, footballer, Tom Brownlee and the Ordnance Gazetteer remarks that: "the minor poet, James Graeme (1749-72)" was a resident of the locality.[1]

There is a primary school in the village which is part of the Biggar Learning Community, that includes the Biggar High School. A new school was built and opened in 2015. [4]